By Charles James on September 29, 2020 in General Misc. Stories 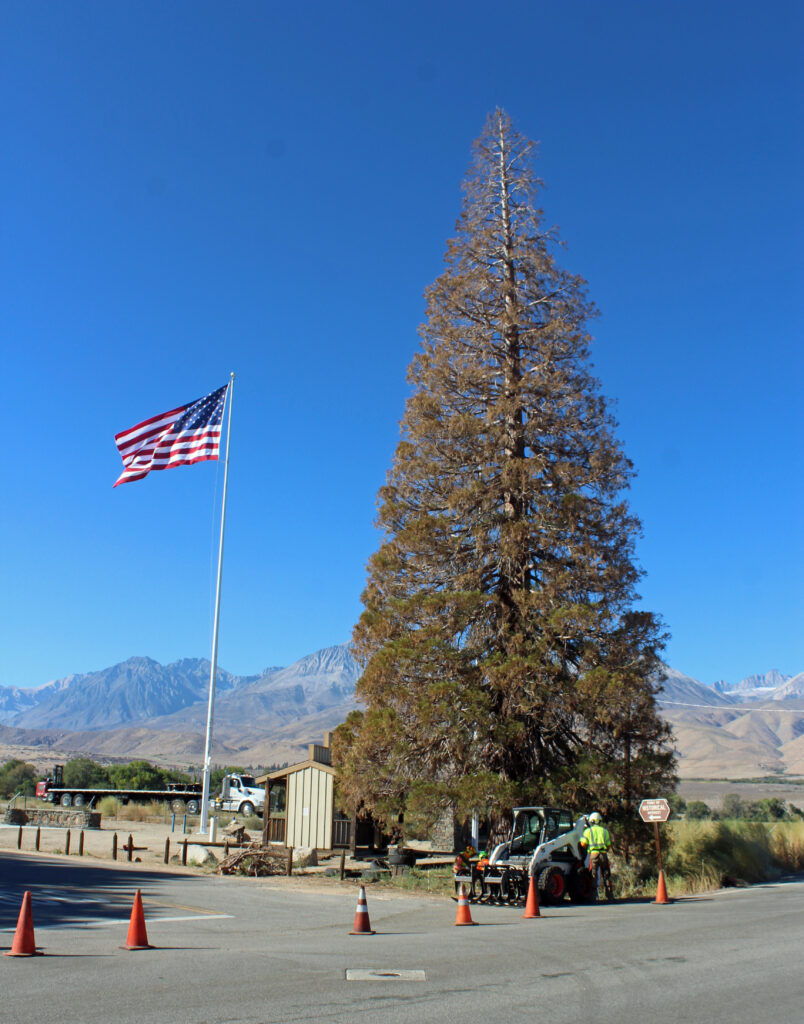 This morning I watched along a couple of dozen other people from the town of Big Pine as The Roosevelt Tree, located in the Big Pine Veterans Memorial rest area, was cut down. On this beautiful, wildfire smoke-free Monday morning, Sept. 28, we watched as the giant sequoia was felled 107 years after it was planted. The tree had to be removed due to a combination of not enough water, soil compaction, stress, and disease.

If you would like to see the video of the tree coming down, taken by our videographer and Big Pine resident, Jesse Steele, CLICK HERE.

Considering that giant sequoias can live up to 3,000 years, this tree was a mere baby. Giant sequoias are the third longest-lived tree species. And to clear a common misconception up front, a sequoia is not a pine tree at all! Sequoiadendron giganteum is also called Sierra redwood, a coniferous evergreen tree of the cypress family (Cupressaceae), the largest of all trees in bulk and the most massive living things by volume. 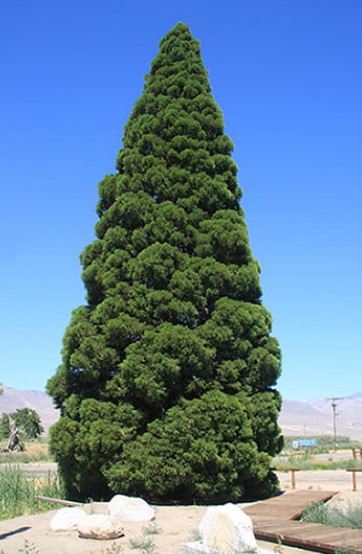 The much-beloved Roosevelt Tree in Big Pine, Calif., in better days. (Photo from US Forest Service)

For those of us watching the tree’s removal, you could almost feel our spirits falling along with the tree as it began to tilt and then crash onto the pavement in cloud of dust, debris, and broken limbs flying into the air.  There was a communal sense of sadness…a sense of loss among those of us there. A lot of head shaking.

People can become extremely attached to a tree. It might have been a favorite tree that as a child, you first climbed from branch to branch, or one in which you and friends built a tree house, or the maybe the one that, whenever you played hide-and-seek, the first place everyone looked for you was somewhere in that tree, because everyone knew you had a “thing” about hiding in that tree. In the case of the Roosevelt Tree, “the thing” the town of Big Pine had for that tree was just the sheer beauty and majesty of it; a tree not normally found on the valley floor but higher up on the western slopes of the Sierra Nevada mountains between 5,000 and 7,000 feet in elevation.

And when the Roosevelt Tree was decorated for Christmas, well it became even more special and more beautiful. 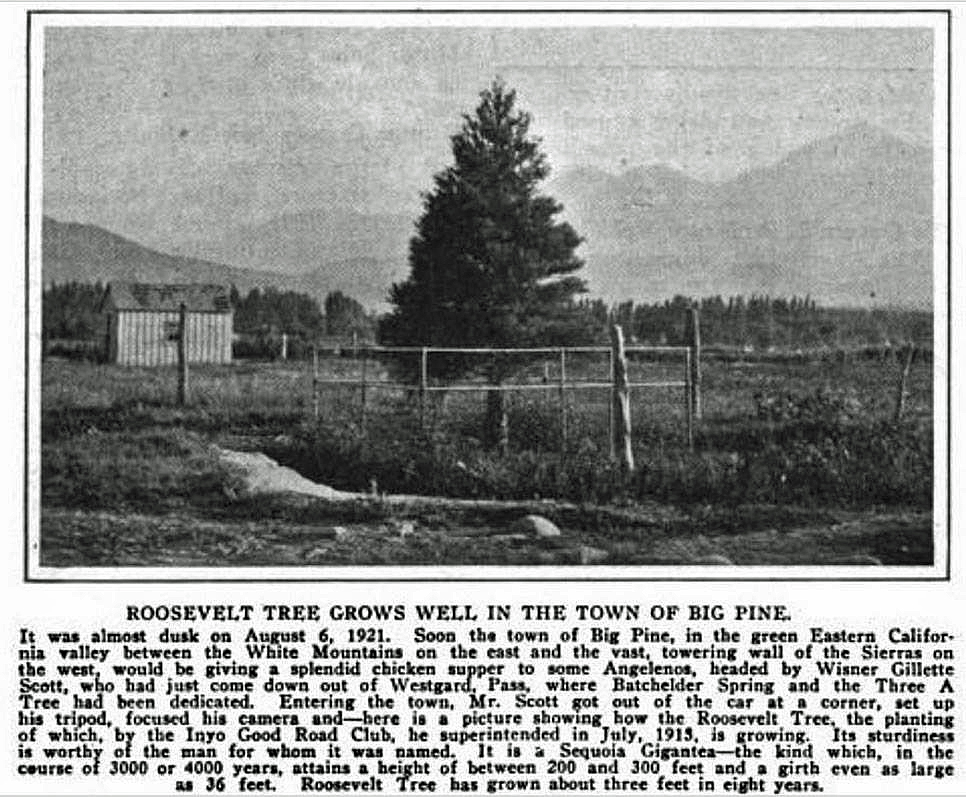 As the tree fell, I remembered a poem that came to mind titled, “Trees,” a simple and gentle poem by American poet Joyce Kilmer. It was written in February 1913, the same year the giant sequoia, named in honor of President “Teddy” Roosevelt, was planted in Big Pine on July 23, 1913, when the Westgaard Pass was opened to automobiles.

I think that I shall never see
A poem lovely as a tree.

Poems are made by fools like me,
But only God can make a tree.

The people of Big Pine would agree that, yes, “only God can make a tree,” but they would also tell you that a tree can make a lot of sweet memories.

[Many people are interested in what is going to happen to the wood from the tree. The Big Pine Civic Club has been taking suggestions and looking into making mementos from parts of the tree. Stay tuned to Sierra Wave for more information.]

Beauty will never pass away ….
We will.

I suggest utilizing the trunk in a manner that will continue to allow children of all ages to climb the tree, albeit not in its customary form.

I hope the tree is used for study, it had over 100 years of environmental history stored in it’s tree rings. The same 100 plus years DWP was changing the natural flow of water in Owens Valley.

“I think that I shall never see, a poem as lovely as a tree, ~ A tree whose hungry mouth is pressed, against the earth’s sweet flowing breast.~ A tree that looks at God all day, and lifts her leafy arms to pray. ~ A tree that may in summer… Read more »

It seems silly they cut this tree down, unless: it was deemed hazardous, had internal rot, beetle bore holes, or was sapless as in dry under the bark (cambium). Like was said in the other articles, it could have been fluctuating groundwater levels that did it in. It did not… Read more »

Eric – The reason the tree was cut is in the first paragraph: “The tree had to be removed due to a combination of not enough water, soil compaction, stress, and disease.”

Carole, there was an editing error in the initial posting, which is what Eric noted in his initial comment to us. When copying and pasting the article from the word document to the web program, a sentence was left out which, thanks to Eric’s comment, we were able to fix… Read more »

This article brought my husband and I to tears! Good coverage,Charles.

Why was the tree taken down???

A combination of not enough water, soil compaction, stress, and disease killed the tree. A sentence was inadvertently cut out during the recording process and posting to the web. It’s been fixed. Thank you for noticing! We’re going to miss that tree!

I believe it was a higher than normal water table that started it. Quite the opposite of what your claiming charles

Come on don’t tell me you believe that rubbish too many trees are cut down on this planet , trees are our lungs they purify the air ,we. Should all love the trees around us they are truly remarkable . HUG A TREE ,say Thank you x

A newsworthy event and better than average prose in the article. But… why? That fundamental question was not addressed. There may have been a good reason for felling the tree, but it was never mentioned in the story, and it was probably the most important piece of this account for… Read more »

Eric, thanks for noticing the omission. It was in the original writing of the article, but in the cut and paste process, a sentence was lost: “A combination of not enough water, soil compaction, stress, and disease killed the tree.” Oh well. BTW, if you would like a little more… Read more »

Don’t doubt that this is what we’ve been told, but of those four factors, “not enough water” seems easily curable; “soil compaction” can be addressed, and “stress” without further information is useless to understanding why the tree had to go. That leaves disease. Which would make sense if the photo… Read more »

So its funny that everyone is blaming the not enough water on one agency. In 107 years the civic club couldn’t come up with a plan to take care of their own trees water.?
Seems like it got forgotten.