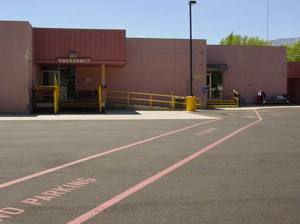 SIH staff had readied the facility for the survey and the required staffing for dietary, pharmacy, nursing, physician, radiology and laboratory were all in place, According to a telephone conversation on January 14, 2016 between Dr. Karen Smith, Director of CDPH, and Richard Fedchenko, SIHD Board President, the survey failed for two deficiencies.
The first was regarding physicians. At an earlier meeting of the Southern Inyo Healthcare District held on January 12, Dr Parmod Kumar was given hospital privileges and appointed as Medical Director of SIH. He will serve as the hospital physician on call 24/7 for several days or even a week at a time. What was missing in the survey was a second physician to whom Dr. Kumar would pass relevant files and care information on the patients as he turned those responsibilities over at the end of his duty cycle. That is already being addressed by the new management team at SIH, HealthCare Conglomerate Associates (HCCA) with the preparation of contracts with a number of qualified physicians who are available to serve SIH.
The second deficiency was the absence of the nursing and support staff for the Skilled Nursing Facility (SNF). HCCA had not been notified by the CDPH survey team in advance that they expected to see this team in place. That will be easily rectified for the next survey.
Dr. Smith indicated that CDPH has been working hard to save the hospital and that it is the position of the CDPH that the applicable law required the suspension of the license because the hospital was not yet in total compliance. She further assured SIH that re-licensing will be easy when the hospital is fully operational and ready to admit patients. There is no fine for being in suspension, and Dr. Smith advised that the suspension of the license will have no effect on the hospital’s standing with MediCare and MediCal. Reimbursements from these governmental payers will continue for the bills already submitted and new billings may resume when the suspension of the license is removed. Dr. Smith also advised that the survey process with respect to re-licensing will remain the same as it was prior to the suspension. The process will not be made more difficult simply because the license has been suspended. She added that the survey team is quite busy but will be standing by to give SIH high priority once the hospital is ready for another survey to be conducted.
A court action to prevent CDPH from independently suspending or forcing the hospital to voluntarily suspend the license was unsuccessful.

We have no hospital partly because to many of our local employers refuse to pay for their employees insurance.

It seems (at best) irresponsible that the previous SIH-Board allowed the CEO to hold the positions of CEO, CFO, and CCO concurrently. My humble understanding of CA non-profit law is the CEO may not, while serving as CEO, concurrently serve as CFO. A credible non-profit is transparent, works for the… Read more »

Did anyone at SIH ask CDPH what the criteria was for obtaining a successful survey? (It doesn’t take a rocket scientist to determine that a second physician is needed to receive the baton when Dr. Kumar’s shift ends.) It seems that discovering the criteria for successful survey is the responsibility… Read more »

When it rains it pours.

The Economic Collapse is taking out everything, even the Cottonwood Plaza don’t stand a chance

The County’s head honchos better get on this quick!! it is now a public health problem!!

Well, Inyo County “pays top dollar guaranteed salaries to recruit the best and brightest” throughout the administrative level of all departments. Anticipating and heading off these types of problems should be as routine as supervising the motor pool or the employee coffee fund at their level of competence and salary.

Richard, since the parking lot is close to empty, I’d say you might want to call first.

Is it unsafe to go there?