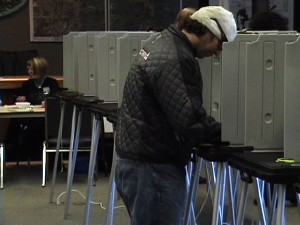 With many eyes focused on national politics, news developed locally for County Supervisor elections in June.  Seats are open in both Inyo and Mono
Counties and seats are also available on the Mammoth Town Council.

In Mono County, Clerk-Recorder Lynda Roberts said that these seats are up for election: District 2 held by Hap Hazard, District 3 held by Vikki Bauer, and District 4 held by Tim Hansen.  Roberts said that at this point Hap Hazard has picked up petitions to run and so has Bob Peters for District 4.  Also on the ballot for June is the seat of Superior Court Judge Stan Eller.

Two seats on the Mammoth Town Council will appear on the ballot – those held by Mayor Jo Bacon and Councilman Skip Harvey.  Those interested in these seats must file with the Mammoth Town Clerk at the Town Offices.

Signatures in lieu of filing fees are due in by February 23rd.  Declarations of candidacy may be filed between February 14th and March 9th.

I’ll get it started as far as the Town of Mammoth Lakes. Jo Bacon has been a total zero in her four years as a Town Council Member other than being a schill for MLTPA and mercifully needs to be replaced by the voters. Skip Harvey is honest, caring, and… Read more »

Right on Hobie, I like your assessment of the current council members in MNO CO. Yeah .. you can’t really bash them all individually, as a whole, some try to do what is right, but they get out voted by those who are dead weight filling a seat on the… Read more »

This is the good old boys town. That’s why there’s no term limits.

Dee, I understand that Inyo County is now your home. I would love to see YOU run for supervisor!
As for other political openings here in Mono County and Mammoth, I don’t even want to get started. I’ll just get depressed all over again.

WOW so many dislikes for asking a question. I guess we aren’t supposed to do that. I still would like an answer, somebody out there must know the answer. I mean is it something that was never brought up before? Why is there not a term limitation on supervisors?

Home girl,
I just spoke to Inyo County’s Clerk-Recorder Kammi Foote who confirmed that there are no term limits in law for county boards of supervisors. For many years there were no term limits on the state legislative level until citizens put forward a measure that changed things.
Benett Kessler

Thanks Benett, we were just talking at work one day and it came up. I thought it was a good question.

Home Girl, have you noticed an improvement in state governance since the voters term limited Sacramento?

A question was brought up today and maybe someone could answer. Whys isn’t there a limitation on time served for a supervisor? If the President can only serve two terms, why can a supervisor continue to run indefinitely. The incumbent almost, always wins, even if they are substandard. just a… Read more »

Inyo supervisor seat up for grabs? With the news that DWP wants Mammoth creek, perhaps a candidate with some spine to make DWP live up to past agreements with Inyo county might be appropriate. We need tough supervisors on this and other issues, too bad DWP knows they can just… Read more »

Dee- I agree. The Inyo Cnty supes have certainly proven they have no spine in dealing with LADWP. It’s up to the Owens Valley Committee to bring DWP to the courtroom to get stuff done.

Too bad the Board of Supervisors ignore the citizens of the county and do what they want.