By Deb Murphy on September 15, 2021 in Election, Government Agencies/Utilities, State of California 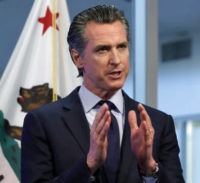 News reports, as late as two weeks ago, on Tuesday’s recall vote made it sound like Governor Gavin Newsom may need to pack a bag and head back to San Francisco. But, based on results at 10:30 last night, the votes against the recall came in at 66-percent of the total. Newsom’s safe.
The first sign, at least for political junkies, Newsom would come out on top came just an hour after the poll closed when MSNBC’s Steve Karnaki, the cable news’ political numbers guy, looked at early results from the more conservative enclaves of the state: San Diego and Orange counties. It was no contest; the “no” votes were running close to 66-percent of the early totals.
Both Inyo and Mono county voters ended up on the winning side, though the vote spread to keep Newsom in Sacramento was far wider in Mono County.
First Inyo numbers: No: 2,275; Yes: 2055. Larry Elder, who bought a lot of air time and followed the Trump political philosophy, led among the potential Newsom replacements with 1,538 votes.
Mono numbers: No: 1,945; Yes: 1,208 with Elder getting the nod from 867 of the “no’s.”
KSRW will check in with both county’s registrars to get the final numbers later this week.

I see the title of this article STILL HAS NOT been updated, Inyo County voted to Recall.

Dont worry folks, its all going to be ok. Remember , when Trump was elected the sky was going to fall and everyones hair was on fire… We lived through it, and actually there was a reason to appreciate and value being an American. Trumps attempt at keeping America as… Read more »

Might want to change the title of this article, consider Inyo County voted FOR recalling

I posted before the 5th report had been released. Thank you for the updated numbers.

Once again we see that the loudest voices don’t always equate to the majority of voices.

Personally I believe that no election should be called, or info. on results leaked out until all votes are in and counted.

The problem was that Trump 45 was RAW and Spoke from his Heart . Over the last 50 plus years many minorities in the United States have been sheltered and coddled into a sense of being so (SPECIAL) that their needs and lifestyles should take priority over the Majorities needs… Read more »

look up xenophobia. It’s near the end of that big book full of lots of words. Your misconception about the basis of democracy is either laughable or pitiable. Democracy was invented to PREVENT the tyranny of the majority, not to ensure it. Try a remedial civics class: you desperately need… Read more »

Empathy for Who ? Empathy for antagonistic malcontents who Riot , Loot and burn Cities to the ground ! Empathy for Violent Thugs who kill Police Officers trying to uphold the law , Empathy for those same thugs who are killed while committing those same crimes and who’s Family Scream… Read more »

Trump lost because what he was trying to sale did not agree with most voters. So what do his supporters need to do to get back in the game. It is not working for them to yell and lie about the result. So instead of that please tell me what… Read more »

I’m still curious how you choose which words to capitalize.

Simple , I am Loud and Outspoken like Donald J Trump . I Had to go to work and learn a trade instead of going to college or worrying about correct grammar . But i will bet you can understand my message regardless of the capitalization . Or are you… Read more »

And BTW , This Nation was Founded as a Constitutional Republic ! Go check out that big book you are attempting to REVISE before you go out and tear down another Historical Monument burn down another city.

You can’t speak from the heart if you don’t have one .

Trump lost the popular vote in both elections. You’ll never put that truth back in the bottle either. And bluster? Yeah I’ll give you that. But honestly? HAHahahahahah, right.

This is laughable. Trump never spoke from his heart, nor told any truths. He spoke what he though would benefit him at the moment, and often changed is statements. This is an immoral egotist and you along with many were swayed by his “tweets” and inane speeches. Sigh. Again- they… Read more »

You tools will Vote for Anybody who allows you to have a Pot Dispensary . lol

This recall,the same as we’ll see in the Presidential election coming up in 2024….if trump backs a candidate,that candidate will lose..

WoW , Talibiden has been the President 9 Months , You have TDS hard , Get Help . lol

INYOFACE To be honest,I kinda miss turning on the news,listening to trump’s( that other guy’s ) lies,and laughing,shaking my head,talking about them the next morning. Now,I guess all we have is to see and realize what a true joke he was….and a liar. America’s biggest mistake in my lifetime. And… Read more »

You want HONESTY , OK . There is a vary large demographic in the United States ! These people are called Patriotic American Citizens. Some are young , Some or Old . I guess it depends on how you were raised . These people are taught to take personal responsibility… Read more »

INYOFACE
Yep….”freedom” is watching and listening to someone ( that other guy’s) lies being told to the American people for 4 years…and many believing them.
I pity you.

Your problem is that you call out MSNBC and CNN but not Fox News? You’re brainwashed and it’s hard to take anything you say with any credibility.

A Saudi Arabian Prince owns a good portion of Fox News Corporation. I believe nothing from them . I watch America’s Voice or Newsmax. Try Again.

David said years ago that he never has and never would vote for a republican. So I guess that you are right.

Hey if you want to be a cheerleader for one of the biggest con men in the history of our nation, that’s your right. But Trump doesn’t represent any of those positive traits you’ve described above.

Really , Hmm , Name one President in the last 200 years or more that Donated his entire Presidential Pay to Charities . Name me one President who went in with the National Guard after Hurricanes , Tornado’s , And other natural disasters and handed out needed supplies personally instead… Read more »

Name one? How about two, Kennedy and Hoover both donated their salaries. That aside, yes he donated his $400,000 annual salary to various government agencies, (which are not charities.) Many of those same agencies saw their budgets cut by FAR more than what he donated to them. Meanwhile he visited… Read more »

We’ll help you pack for Texas

Are you kidding , California Wastes More than that amount every Month providing Welfare and EBT/Food Stamps and Housing to Illegal Aliens . Wake up .

You should issue a correction to this article. The numbers used, for Inyo at least, were the preliminary count. The final count has a different result in Inyo.

Genius move by California’s far right to trigger a no-chance-to-win-recall that forced the public to spend $260,000,000 on the election rather than spend that money on schools, hospitals, roads, bridges. Who needs that stuff anyway?

WoW , Good Job Inyo / Mono Counties . Figures you would vote to protect that Grafting Socialist Gavin Newsom . After all , Both Counties are Basically just as Corrupt as he is . And will shrivel up and Die without a constant flow of Government Cheese .

What was the alternative, Larry Elder? A Trumper who thought that slave OWNERS were owed reparations? That’s the best the Republican Party could come up with in a deep blue state? And you’re surprised by this? What a joke.

I am not surprised by anything that happens in California ! You can Pay the Half-Wits you Created in your School Systems 15 Dollars an hour to screw up your Overpriced Order at the McDonald,s Drive through until the sky falls . You can put a 120 % Tax on… Read more »

I already did . And after i moved the State of California Confiscated my State Tax return , EXIT PENALTY .
Good luck in your CORRUPT SOCIALIST RAT-TRAP.
Liberal Socialism always fails , Eventually they run out of other peoples MONEY .

This morning the SOS is reporting Inyo went YES by less than 100 votes. Mono is still NO. There is over a month to complete the final certification, but later this week we should have the final numbers.