The Australian film and television actor Rod Taylor passed away on January 8, three days shy of his 85th birthday. He is best remembered by many of us (of a certain age) from his movies, The Time Machine and Alfred Hitchcock’s The Birds, among others. 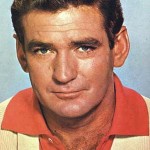 Taylor’s last film, in 2009, was Inglorious Bastards, set in World War II. At the special request of Director Quentin Tarantino, he played Winston Churchill opposite Brad Pitt, which was fitting as he was something of a Brad Pitt in his heyday with his boyish good looks. While I am sorry to hear of his passing, I’ve always been a little envious of this guy. Here’s why:

In the summer of 1960 I was nine years old and living in Port Arthur, Texas. My dad worked at a store selling appliances while my mom worked as a cashier at a local grocery store. With both parents working, I pretty much had the summer all to myself without much in the way of parental interference. The paranoia surrounding child abduction wasn’t on the radar in those days , although with four siblings, there was every possibility that my hard-working parents might have welcomed one less mouth to feed.

For some reason I can still remember watching parts of the 1960 Democratic Convention on our black & white television that was held in Los Angeles that July, although “why” I remember it, much less watch it, is a mystery. It was most likely sheer, utter boredom as at that adolescent age I certainly had little interest in national politics. The Democratic convention was not all that I remember of that summer.

During the summer of 1960, I spent a lot of time at the local movie theater watching movies. Two in particular stand out, Dakula , and The Time Machine, which I watched 12 times in one week! The movie, The Time Machine, was based on a book of the same name written by H.G. Wells, and starred Rod Taylor as a fictional Wells. It also featured the debut of a stunningly beautiful blonde, blue-eyed, 17-year-old actress by the name of Yvette Mimieux in the role as “Weena.”

The movie takes place in Victorian times and then fast forwards 8,000 centuries into a future which proved as promising as the century in which we now live, which is to say an era of “fast food” with lots of room for improvement.

Oh how I envied Rod Taylor, for the time he spent with Weena. In one memorable scene he teaches her how to spell her name “W-e-e-n-a” in the dirt. It was probably the only time in my life that I ever had an interest in a teaching career, even though in my adolescent mind I was really thinking, “Wiener?”, which of course made me laugh.
I showed up religiously every day at the noon matinee for a n entire week and stayed through two or three showing; only reluctantly leaving that dark, air-conditioned theater and Yvette to go home to avoid getting in trouble.

Smitten, at the tender age of nine, I was ready to spend the rest of my life with Yvette, even at the risk of becoming lunch for the Morlocks, who lived underground and had some seriously bad culinary habits– that being the bad habit of eating people! Hence, the future of “fast food.”

The Morlocks, green-skinned with blond hair, looked sort of like a cross between a stunted Jolly Green Giant and poorly dressed, evil-looking apes with red, glowing eyes, having a bad hair day. Unlike the Jolly Green Giant however, they were definitely not vegetarians. They lived underground and feasted off some seriously mentally-challenged humans living above ground.

And darned if they didn’t want to make lunch out of poor Weena and her fellow entries, her people, the Eloi! However I will confess that I completely understood their craving! Even to a completely clueless, preadolescent 9-year-old, a seventeen-year-old Yvette Mimieux definitely looked good enough to eat, even if you weren’t exactly clear on the “why” that was so. At some primitive level, even the Morlocks must have had some good sense of taste.

Looking back on it more than fifty years later, I realize that being nine years old is a pretty amazing age. I may have been innocent and clueless–but nevertheless I was able even at that age to appreciate beauty… and apparently a good meal when I saw one!

But you know what would have been even more amazing? Looking forward as a nine-year-old with a real Time Machine…and having a real Yvette Mimieux to look forward to in the future! Yowza!

Or would that be “Yummy”?

Not if ya sneak in!

What’s amazing is that a kid from a working class family could afford to go to the movies 12 times in one week.

Pedro, Fifty-four years ago, when I was 9 years old, going to the movies was a whole lot cheaper than it is today! The reason I could watch The Time Machine so many times was simply that I would go to the matinee, which cheaper. That and they had matinees… Read more »

Mr. Taylor was a wonderful actor. My condolences. I loved him on ” Walker Texas Ranger”, but my favorite was his role in “The Birds”.

Sorry to hear of his passing. My condolences to his friends and family. I was 10 in 1960 and also was mesmerized by The Time Machine (and Yvette Mimieux!).