The largest concentration of ancient rock art in North America is typically off limits to the general public. About 100,000 examples of rock art are tucked into remote canyons and in scattered, isolated sites on the 1.1 million acre China Lake Naval Weapons Station. Only a limited number of guided tours of the rock art can be fit around the top-secret military mission of the base.

Bighorn sheep as depicted in a sample of Coso rock art. Photo submitted.

But thanks to a recently released documentary film, everyone can now get at least a glimpse at the stunning rock art at China Lake.

That film, “Talking Stone: Rock Art of the Cosos,” will be screened free of charge on Saturday, Aug. 25, at 6 p.m. at the Independence Legion Hall in Independence (at the intersection of US 395 and West Kearsarge St.). The filmmaker, California and Great Basin anthropologist and archaeologist Dr. Alan Garfinkel, will be on hand to discuss the impressive rock art and the various theories about what the art might have meant to the ancient peoples who created it. The event is being sponsored by the Eastern California Museum.

The film showcases hundreds of petroglyphs at numerous sites on China Lake. A wide variety of rock art is presented in the film for the audience. The art and other relevant artifacts, many of which are thousands of years old, are also examined and analyzed by a number of experts in the field. 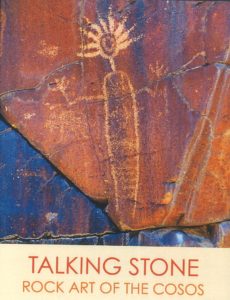 Before the film screening, Dr. Garfinkel will be giving a presentation at 1 p.m. at the Eastern California Museum (155 N. Grant St., Independence) on the discovery of a bighorn ram skull cap set atop a stacked rock cairn at the Rose Spring site in the Owens Valley. Dr. Garfinkel will describe the character of the discovery, date the feature, and posit its meaning and function.

The feature is intriguing since it might represent a prehistoric manifestation of the religious traditions associated with Coso Representational Rock Art, according to Dr. Garfinkel. The context for understanding this discovery and other prehistoric bighorn features in the Desert West will be explored. According to Dr. Garfinkel, a review of ethnographic accounts, native oral traditions and cosmology, and bighorn figurative sculptures (split twig figurines) and rock art, help explore the religious and ceremonial significance of this animal to the aboriginal people of eastern California and more broadly the Far Western Region of the United States.

The hour-long “Talking Stone” film offers a rare look at the huge collection of petroglyphs at China Lake. The film takes viewers onto the usually restricted military base and into such internationally known rock art sites as Big and Little Petroglyph canyons and Dead End Canyon.

Some panels hold hundreds of different images. Other panels contain multiple images of a single item, such as bighorn sheep. Other images seem to be purely artistic or abstract, or simply geometric images, such as circles.

The mystery of the rock art is presented by Dr. Garfinkel, the China Lake Naval Weapons Station’s resident archeologist, experts from the Maturango Museum in nearby Ridgecrest, several members of the Kawaiisu Tribe, and well-respected California Native American basket expert and artist, Justin Farmer.

Copies of the film will be available for purchase, as will copies of Dr. Garfinkel’s books, “Archaeology and Rock Art,” and “Handbook of the Kawaiisu.” Dr. Garfinkel has published five books and more than 50 scientific articles in academic journals. He is the recipient of both the 2008 and 2011 California State Governor’s Award for Historic Preservation. He is currently the Principle Archaeologist for RCA Associates, Environmental Consultants, in Victorville, CA, and is the founder and president of the non-profit California Rock Art Foundation.