From Bridgeport to Lone Pine, chances are you are seeing some smoke in the area from the many wildfires burning in the Sierra. 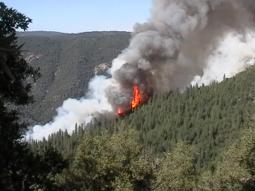 Those in the northern portion of our region, near June Lake, Bridgeport, and Lee Vining may be seeing smoke from the Knight Fire. The 4500 acre Knight Fire is located about 10 miles north of Twain Harte west of Sonora Pass. This fire started Sunday, July 26th and is listed as having extreme potential for growth.

In Yosemite National park, a number of fires continue to burn. The 530 acre Wildcat Fire is burning in the backcountry of Yosemite between Pate Valley and Glen Aulin. This fire was started by lightning on July 29th.

Two other fires in Yosemite, the Grouse and the Harden fires could send smoke as well. These two fires are winding down, but park officials report that there could be flare-ups as unburned areas inside the fire perimeter catch.

The Shotgun Fire is burning in the Golden Trout Wilderness Southwest of Lone Pine and looks to be winding down.

In Sequoia Kings Canyon National Park, fire fighters spotted the Granite fire after a number of lightning strikes on Wednesday July 29th. The Granite Fire is burning near the Middle Fork of the Kaweah River. Park officials say that this fire was contained at last word. The 20 acre Horse Fire also continues to slowly grow in Southern Sequoia National Park.

We work to provide daily news to all of the Eastern Sierra, in the tradition of Eastern Sierra News Service and the Sierra Wave. We bring you daily happenings, local politics, crime, government dealings and fun stuff. Please contact us.
View all posts by News Staff →
400,000 Marijuana Plants Eradicated on Public Lands
Horizon Air Will Expand Service This Winter