The following press release was issued by the Eastern California Museum staff:

There will be a party fit for royalty on Saturday, September 24 in Independence to celebrate the 100th birthday of the venerable Slim Princess locomotive. 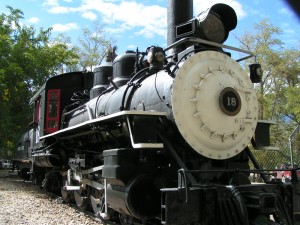 The non-profit Carson & Colorado Railway will be spearheading the birthday events that will commemorate locomotive #18’s century of service, first as an operating train engine that plied the narrow gauge tracks up and down the Owens Valley, then as a focal point of historic Independence from its perch in Dehy Park.

The CCR is currently in the middle of a total overhaul of the historic engine, but that effort is just one more reason to celebrate, and draw attention to the region’s rich railroading heritage.

The 100th birthday celebration will begin at 5 p.m. with a barbeque dinner in Dehy Park in Independence, located on the north end of town right on U.S. 395. Visitors will also have a chance to enjoy original train artwork by Anthony Solano, and a small photo exhibit of historic Carson & Colorado and other Inyo County railroad related photos being displayed by the Eastern California Museum.

The fun will extend into the evening with live music by Sandy and the High County, a raffle and a dance.

Donations will be accepted for the day’s food and fun, and also to help with the restoration work.

The Slim Princess is currently housed under a new, large tent to protect it from the elements. The CCR has been working on the restoration project for the past several years. The work is being funded by donations and completed by volunteers, several of whom are mechanics and maintenance workers on fully operational steam engines currently running in California and Colorado. During the day on Saturday, interested folks will be able to take a peek at the locomotive, and talk to the volunteers who are working to get the Slim Princess back in working order. For more on that effort and the Carson & Colorado Railway Co., visit the website, www.carsoncolorado.com.

And if that isn’t enough fun, on Friday night, Sept. 23, the Museum will co-host a Sky Night Party at the Historic Mt. Whitney Fish Hatchery, three miles north of in Independence. The star gazing will start at 8 p.m., but people are encouraged to come early and tour the hatchery or bring a picnic dinner to enjoy on the grounds. Star fans can bring their own telescopes, binoculars, and chairs and flashlights. Viewing will feature several planets, random nebulas, maybe a supernova, and the fall equinox. The event is co-sponsored by the Friends of the Mt. Whitney Fish Hatchery and the Friends of the Eastern California Museum. For more information, call 760-878-0258.