An initiative that would tax and regulate marijuana like alcohol has won a place on the November 2010 ballot in California. Nearly 700,000 signatures qualified the measure. 133 of those signatures came from Inyo-Mono. 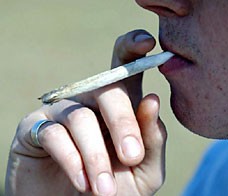 This ballot initiative would make it legal for adults 21 and older to possess up to one ounce of marijuana and allow cities and counties to impose a tax on the sale of pot.

This news comes on the heels of the medical marijuana dispensary ballot measure in Mammoth Lakes. Mammoth’s move to bring this issue to a public vote stirred heated comment among local officials, many of whom will oppose general legalization of marijuana. In generally conservative Inyo and Mono Counties, many publicly oppose legal pot.

Statewide, one poll found 56% of respondents favored legalized marijuana. The measure’s main advocate is Richard Lee, described as an Oakland marijuana entrepreneur who has spent $1.3 million on his campaign so far. Sacramento officials from the California Police Chiefs Association are quoted as saying that law enforcement will launch a broad effort to defeat the measure. Another complication – pot remains a federal crime.

As we had reported, at the Eastern Sierra Council of Governments meeting recently, officials talked about the options to regulate medical marijuana dispensaries. While Mammoth has placed the issue on the ballot, Bishop and the two county governments have banned dispensaries in one way or another.

Inyo Supervisor Susan Cash had offered how other communities have handled marijuana from outright bans to regulation or no regulation. Officials basically agreed to watch Mammoth Lakes’ measure. Bishop City Councilman Jeff Griffiths said he is concerned about community impacts and how to determine the difference between transport of medical marijuana and illegal marijuana.

The medical marijuana issue may disappear if voters say yes to legal pot.

We work to provide daily news to all of the Eastern Sierra, in the tradition of Eastern Sierra News Service and the Sierra Wave. We bring you daily happenings, local politics, crime, government dealings and fun stuff. Please contact us.
View all posts by News Staff →
Trout Season Hindered by Environmental Lawsuit
Bureaucrat Beat: Real History, Money Laundering and Mammoth’s Oz