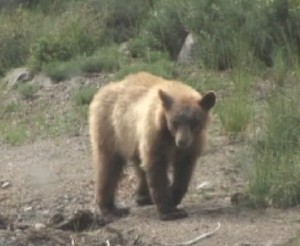 The third episode of the new Bear Whisperer on Animal Planet will air Thursday night at 10 pm.

Mammoth Lakes Wildlife Specialist Steve Searles is the star, surrounded by Mammoth’s bear celebrities. The Thursday night show will center on one of Mammoth’s most well-known bears, Blondie. She surfaced a couple of years ago and broke into many homes and cabins.

Then after disappearing last year shortly after finding herself on a shoot-to-kill list, Blondie returned this year with a cub. Steve tried to change her behavior before she led the cub down the wrong path as well, but when the human world literally crushed Blondie’s world, the bear gets into even more trouble than before. This time when she ends up back on a “shoot to kill” list, her luck runs out.

We work to provide daily news to all of the Eastern Sierra, in the tradition of Eastern Sierra News Service and the Sierra Wave. We bring you daily happenings, local politics, crime, government dealings and fun stuff. Please contact us.
View all posts by News Staff →
MLPD goes the distance in the desert
Eastern Sierra Connect will survey broadband needs