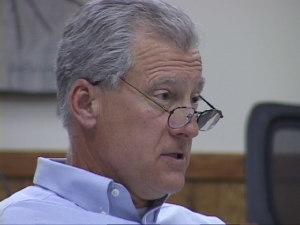 respecting the Water Agreement”. Coufal scolded Inyo County. Said Coufal, “I’m not sure if you’re really trying to look at the goals of the agreement.” Ironically, Inyo citizens point to at least a dozen violations of the Water Agreement by LADWP and wonder if Coufal were just spouting the party-line of LA – get all the water you can get.

In spite of the fact that LADWP has relentlessly refused to consider the depth of the water tables as a way to manage groundwater pumps, Coufal went religiously on as he commented on Inyo County’s recommendation for pumping this year. “We come from a place of disappointment and concern,” fretted Coufal. “Inyo County’s approach seems like there’s no recognition of the Water Agreement,” he said.

Coufal continued with a patronizing message when he spoke of LA’s plans to spread water, that even he admitted was largely plentiful this year. He maintained that vegetation in the Owens Valley is in good condition. When a citizen tried to interrupt with questions, Coufal said, “This isn’t a public dialogue.” That was for sure.

He continued with his defense of LA’s position. Coufal said DWP’s proposal to pump 91,000 acre feet this year was “very conservative.” He showed a slide that added up to zero groundwater export for LA. What Coufal did not say was the City of Los Angeles plans to get 71% of its entire water supply for the year from the Eastern Sierra – surface water from the Owens Valley and the Mono Basin.

We work to provide daily news to all of the Eastern Sierra, in the tradition of Eastern Sierra News Service and the Sierra Wave. We bring you daily happenings, local politics, crime, government dealings and fun stuff. Please contact us.
View all posts by News Staff →
Mammoth Town Council approves $36,000 to implement new brand
Mammoth Hospital building purchase in Bishop raises questions