Mammoth Lakes, Calif. – The kitchen is the heart of any home—especially during the holidays—and the same could be said about the church basement kitchen in the funny and down-to-earth musical comedy, Church Basement Ladies. 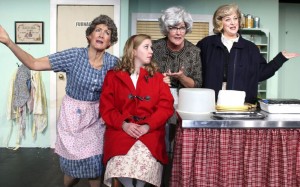 Set in the basement kitchen of the fictitious West Cornucopia Lutheran Church of the Prairie in rural Minnesota, the musical finds its four hard-working ladies—and its one frequently befuddled pastor—cooking meals and solving problems during a holiday Lutefisk dinner, a funeral, an Easter fundraiser, and a wedding.

They stave off potential disasters (like—gasp!—interfaith marriage), share and debate recipes, instruct the young, and keep the pastor on due course while thoroughly enjoying—and bonding with—one other.

Based on the best-selling book “Growing Up Lutheran,” the musical has been charming audiences across the nation since 2005. Director Juliana Olinka brings the show to the Eastern Sierra community.

“I love being able to entertain people of all ages,” said Olinka. “Comedy and music are my passion and bringing this show to life with such an outstanding group of people on stage and behind the scenes is a holiday treat for me.”

Ticket prices online are $20 for general admission, $18 for seniors, and $10 for students. Tickets at the door are $22; sorry no discounts. Reserve your seat during the busy holiday season
at www.MammothLakesRepertoryTheatre.org or by calling 760-934-6592. See you at the Edison!