The comedian Jerry Seinfeld once observed that “According to most studies, people’s number one fear is public speaking. Number two is death. Death is number two. Does that sound right? This means to the average person, if you go to a funeral, you’re better off in the casket than doing the eulogy.” 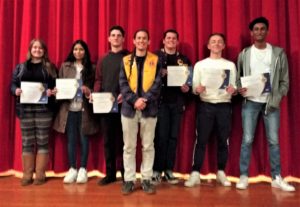 Public speaking is a challenge for most people, so when the Lone Pine Lions Club’s held its annual student speech contest on Friday, Feb. 8, in the auditorium at Lone Pine High School, the question was “Which speakers would most likely be the ones to deliver a eulogy in the future and which would prefer to be the one in the casket?” The good news: Despite giving a speech before the entire student body, none of the 6 brave student speakers had to be carried out in a casket.

The 2019 Lions Club speech topic this year was “Freedom of the Press: What Does it Mean?”

Aubrey Hart, 17, a senior at Lone Pine High School, won First Place in the contest. In doing so, Hart took the first step in winning a scholarship for college by winning the local Lions Club contest.

There are six levels of competition: The local club, zone, region, district, area and state-wide. The zone level will be held on March 7, with Hart competing with the winners from Bishop, Independence, Lone Pine and Mammoth Lakes.

Lions Club international sponsors the program to emphasize the importance of public speaking as a critically important life skill. The winning speech was selected by a panel of judges scored the speeches for their originality, main points supported by evidence, conclusion, emphasis, voice control enunciation, pronunciation, sincerity, enthusiasm, poise, cohesive effort, logic, organization, speaker persuasiveness and adhering to the topic.

Each speech had to be no less than five minutes and no longer than seven minutes in length. The top three finishers in the local contest received cash awards.

LPHS Principal Joe Garza noted that, “It is very important to our district that we are preparing our kids to be successful once they complete college. It is our district’s goal to provide our kids with 21st Century Skills which include collaboration, critical thinking, and communication. We must accomplish this in the classroom so that our students can apply this in the real world. To me, this speech contest focused on the 21st century skills and had a real-life application.”

Hart will attempt to advance through zone, region, district, area and state championship levels to earn up to $21,000 in scholarships.

Lions International is the world’s largest service club organization with more than 1.35 million members in 210 countries around the world. Learn more at www.lionsclub.org.