By News Staff on January 12, 2012 in Government Agencies/Utilities 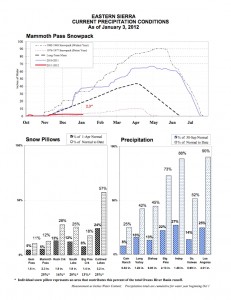 The Los Angeles Department of Water and Power snow and precipitation graph on the utility’s website says it all.  The graph line for this year’s snowpack has nearly tracked the serious drought year of 1976-77.  But, as Department of Water Resource officials point out, there’s a lot left of winter.

Earlier this month, the California Department of Water Resources reported that “California’s mountain snowpack is among the driest for the date on record.”  On January 3rd, DWR measured the snowpack’s statewide water content at 19% of normal.  DWR Director Mark Cowin said, “Fortunately, we have most of winter ahead of us, and our reservoir storage is good.”

Our area, which is considered the southern Sierra, came in at 26% of normal water content.  LADWP’s website graph of current precipitation conditions as of January 3rd show Mammoth Pass snowpack at 2.3 inches of water content.

The electronic snow pillow readings for Inyo-Mono show a dismal accounting of the snowpack.  Mammoth Pass at 12% of normal to date; Rock Creek at 28%; South Lake, 25%; Big Pine Creek, 18%; and Cottonwood Lakes at 57% of normal snowpack to date.

The more southern areas of the Eastern Sierra show a higher precipitation rate so far, with Independence at 88% of normal to date.  Los Angeles shows 90% of normal precipitation for this time of year. Both LADWP and DWR measure snow and water at the first of each winter month until April.

On the recreation side of the snowpack, Mammoth Mountain Ski Area continues to capture many skiers that have turned down less snowy resorts like Tahoe.  As long as night time temperatures go down enough, Mammoth can continue with snow-making.

Fish and Game and Lahontan in a dispute
Letter to the Editor: Seniors on losing end?
3 Comments
Newest
Oldest Most Voted
Inline Feedbacks
View all comments

And once we do get some precip, just remember that LADWP wants every last ounce.

Just in case anyone is intrested.