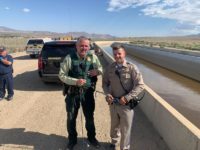 On August 25, 2022, at approximately 1253 hours, Lone Pine CHP received a report of an abandoned vehicle near the Los Angeles Department Water and Power (LADWP) aqueduct, near the town of Olancha, CA. When a CHP officer arrived on scene, he found a white 2019 Audi, abandoned with the door open and personal effects inside.

A National Forest Law Enforcement Officer arrived on scene and cut the locked gate for officers to gain access to the aqueduct. The CHP officer retrieved a rope from his patrol vehicle but when the officer realized the rope would not be long enough, he tied two lengths of rope together before throwing the lifeline toward the victim. The victim, whose head dipped below the surface several times, was able to retrieve the lifeline and both officers were able to pull him from the moving water. Personnel from LADWP and Olancha Volunteer Fire Department arrived on scene. Both parties were treated and released with non life-threatening injuries. Both parties were issued citations for trespassing on private property.

This incident is a reminder of the dangers associated with the swift moving water and strong current within the aqueduct. Stay out, stay alive!

I’ll bet the Judge will go easy on both of them , even if it gets that far . The DA will probably toss it . They oughtta find out who made the 911 call that put the wheels in motion to save his life . Good job Inyo Law… Read more »