Doug Thompson of Lone Pine and the  owner of the Whitney Portal Store shared an experience recently online that he had with a visitor who tied a gas storage container to the top of their van’s roof carrier. The gas spilled from the container onto the car next to the van and could be seen under several other vehicles parked nearby. It had potential to become a serious fire hazard. 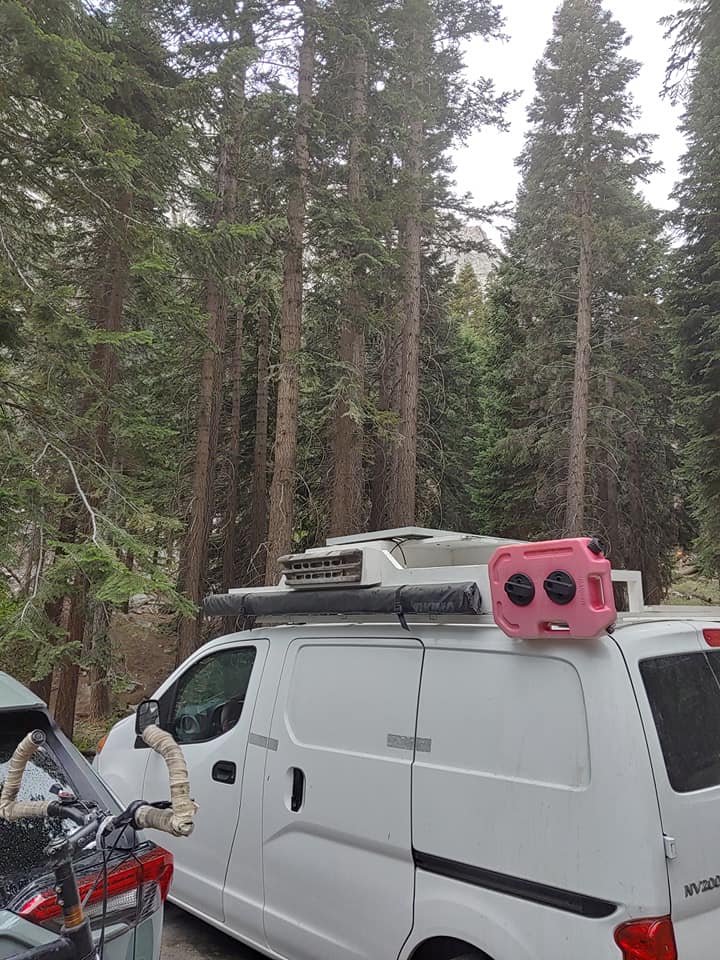 In posting a picture of the van, Thompson commented, “This is the area that the leaking gas can on top of a van caused, also was spraying gas on the car parked next to the van. We see gas cans often in tote boxes on the rear of cars, vans, and pickups. With the hot weather and going up and down mountains gas will expand, you are now driving a very dangerous vehicle, if rear ended your vehicle could look like a pinto.” 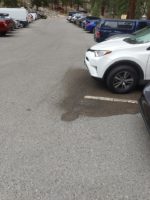 Gasoline spilled from improperly stored gas can leaked and spread under other parked vehicles.

Thompson has enough to worry about with wildfires started by lightning strikes endangering his store. He could do without fires starting in his parking lot outside the Whitney Portal Store.

Combined with the high price of gas due to summer supply-demand or fears of a gas shortage, some people panic and use inappropriate containers to store extra gas in their cars and in their homes. Often, very poor judgement is used as people have been seen using buckets, trash cans, and perhaps even plastic bags, to store gas, and then loading them into their trucks, cars and vans. Remember, this is highly flammable gasoline.

It should go without saying, but you should NEVER keep a portable gas container inside your vehicle or store it inside your home. The cans are designed to vent overpressure from fumes that can build inside the container. Venting insider a vehicle or inside a home is a recipe for disaster. The fumes can cause brain damage, even death. An empty gas container still has flammable fumes inside that can explode.

Never overfill a gas can. Fuel expands under temperature increases. Only fill to 90-95% of the container’s capacity. Always leave an “air gap” to avoid gas spilling out of the can.

Fill a gas can only with it sitting on the ground. Static electricity could spark a fire and having the can on the ground provides a “ground connection.” Remember, Electricity 101: for electricity to flow safely, it should be grounded.

Keep the fuel container clean and free from spilled fuel before putting it into your car.

An unsecured gas can become a deadly projectile if not secured properly. No matter where a can is placed, it should be securely fastened.

Finally, if you are going to travel with gasoline, be sure to use it and store it in a sturdy, robust, preferably heavy-duty approved gas container. Gasoline only has a shelf-life of three to six months, so use it as soon as possible, and if taking it on the road, avoid using plastic gas containers that you use at home for the gas-powered lawnmower, generator or gas-powered weed-whacker.

“Gasoline only has a shelf-life of three to six months…”

What happens to it after that?

None other than Bob Vila gives this explanation in his article, “Solved! How Long Does Gasoline Last?”