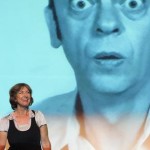 “When I sat with my Artistic Council to plan this 6th season, we talked about making a big splash with the season opener,” stated Mammoth Lakes Repertory Theatre’s Artistic Director Shira Dubrovner.  “I met Karen years ago at the Group Repertory Theatre where we were both members.  She has been having great success with this show–it was named by L.A. Comedy Awards as ‘Best One-Woman Show.’  We both thought it was perfect timing to bring it to Mammoth for the Labor Day weekend.”

A true father/daughter story, “Tied Up in Knotts” takes the audiences on a revealing and zany journey through her life with a host of characters all portrayed by Knotts.  “When my father passed away in 2006, I wanted to pay tribute to him in the way I knew him best: as an amazing, loving dad,” said Karen.  “I try to capture the essence of Don, the man, because I always thought he was the funniest when he was just being himself.”

Don Knotts is best remembered from TV as the nervous deputy Barney Fife on the Andy Griffith Show and Mr. Furley on Three’s Company and in film for his various performances including in the “The Incredible Mr. Lippett.”  Thanks to Nickelodeon and cable TV, new generations have been exposed to this prominent actor of the 50s, 60s, 70s and early 80s.

Next up after “Tied Up in Knotts” is another high-octane comedy “All the Great Books (Abridged)” running September 18-28.  This hysterical romp through the best stories of literature features a cast of thousands–performed by three actors.   Two of them–Brian Stanton and Mark Atha were in last year’s “Every Christmas Story Ever Told (And Then Some),” a show written in the same kinetic style.

October will see three distinctly different projects on stage.  First is the annual Theatre for Young Audience’s production.  This year storytellers use song, dance, and drama to bring “Aesop’s Fables” to life for the young set.

Last year 800 local elementary school children were able to take a field trip to Edison Theatre and see a free performance of the 2013 TYA production, thanks to a private donor and the Mono County Community Grant.  The goal this year is to increase that number to 900 students!  There is a public paid performance of “Aesop’s Fables” scheduled for Saturday October 11 at 2:00 PM.

Then on October 17th-18th, Los Angeles-based actor Brian Stanton returns to Mammoth and the Edison Theatre to perform his one-man autobiographical show “Blank” wherein he portrays 12 characters with humor and pathos after his birth certificate propels him on a fantastic and mysterious quest for identity.

The evening includes a Q&A with Brian and writer Patti Hawn, Goldie Hawn’s sister author of  “Good Girls Don’t”  her personal experience as a birth mother.  The final October production takes place October 31st and November 1st when MLRT presents a live radio production of the classic thriller “Sorry, Wrong Number.”  The actors and the sound effects producer are on stage, just as they were in the 1940s, recreating an old-fashioned radio show.  The evening not only provides suspense and thrills on Halloween but it’s a peak back into entertainment history.

November introduces “Twelve Angry Jurors” a stage adaptation of the well-known “Twelve Angry Men” featuring a mixed cast of men and women, followed by a return of the “Winter Wonderettes”  during the Christmas/New Year’s holiday.  That is followed in January by a return engagement of last year’s hit one-man show “Vincent” written by Leonard Nimoy, and in February by a production of Noel Coward’s classic comedy “Blithe Spirit.”

In March the Tahoe Adventure Film Festival tours through Mammoth on the 6th and 7th, and Magic March! plays on the 13th through the 15th with a new magician imported to enthrall and excite.  The theatrical season concludes with a dramatic presentation of the Pulitzer Prize-winning play “’Night Mother” starring MLRT’s own Shira Dubrovner.

The final event in the MLRT season is a new one–The 1st Annual Mammoth Lakes Film Festival, running Wednesday-through Sunday May 27-31st .   Additional details about the entire season can be found on the MLRT’s website EdisonTheatre.org.

The Mammoth Lakes Foundation is dedicated to supporting higher education and cultural enrichment in the Eastern Sierra. Recent successes include: supporting Cerro Coso Community College, which recently graduated its largest class of students; creating and managing a state-of-the-art student apartment facility; providing a full season of professional-quality theatre in its 100-seat black box theatre; and providing scholarships to Mono County students to attend Cerro Coso Community College–600 scholarships to date. For more information or to make a tax deductible donation please contact the Foundation at (760) 934-3781 or visitwww.mammothlakesfoundation.org. Our nonprofit work is only possible through your generosity.