A cute little Airstream Travel Trailer and lots of big smiles and personal attention from volunteers were several of the reasons more than 21,350 people from all over California enjoyed Camp Inyo at the recently concluded California State Fair in Sacramento. 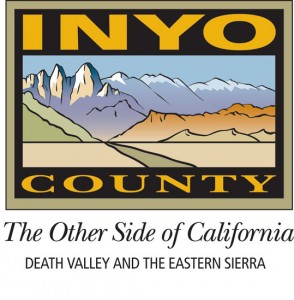 Once again, Rich and Kathy White of Independence put together the Inyo County exhibit for Cal Expo, and once again their hard work and creativity was rewarded in several ways.

Rich added that many visitors said the Inyo County Visitors Guide, with its slick paper and dozens of “gorgeous photos” was one of the best visitors guides at the fair. Rich also said the county’s use of “The Other Side of California” marketing tag line and accompanying colorful logo is also making a lasting, positive impression on visitors.

The exhibit was also a big hit with the judges. The Camp Inyo exhibit received a Gold Award for general excellence in comparison to the other Cal Expo exhibits. It also earned the Best Marketing Presentation Award, which goes to the county that makes the best effort to sell the overall county, its original character or unique commodity. The commodity being presented was camping in Inyo County from below sea level to above 10,000 feet. 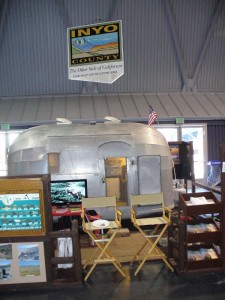 Unlike some counties, in the past years Inyo has consistently installed an exhibit at Cal Expo, and that persistence is paying off. Rich said many people dropped by the exhibit because they wanted to see what Inyo County was presenting this year compared to past years, and substantial numbers of people said they had visited Inyo County because of the county’s Cal Expo exhibit.

The exhibit is primarily funded by the Inyo County Board of Supervisors from the county’s Advertising County Resources budget, and the Lone Pine Chamber of Commerce was the co-sponsor of this year’s exhibit. More than 800 volunteer hours went into building and staffing the exhibit for all 18 days of the fair. Besides the Whites, Kathleen New and David Blacker of the Lone Pine Chamber of Commerce, and Perry and Sally White of Independence helped staff the exhibit.

Visitors were quite enchanted by the “miniature” 1952 Airstream Travel Trailer that was the centerpiece of the exhibit’s “camp site.” Once the silver Airstream caught folks’ eye, they came to the exhibit to see large color photos of many of the campgrounds in the County, from Tecopa in Death Valley to Horton Creek in the High Sierra. The Lone Pine Gem and Mineral Society’s display was quite popular and received lots of attention. Several video presentations as well as photos and posters showed things to see and do in Inyo County, and the volunteers staffing the exhibit offered their personal recommendations and insights into where to go and what to do in the county.

Rich noted that the personal touch provided by the volunteers is always a key component of the exhibit, and is what helps Inyo County’s exhibit make a positive impression on thousands of visitors each year.

Hello, We liked the exhibit so much, that we asked if the trailer was for sale. We were enchanted with that little Airstream trailer. It was a really great display for your County. We are glad to see so many people enjoyed the display. We look forward to seeing the… Read more »

The tag line and Inyo County logo are excellent!

Once again Rich and Kathy White have done a great job of representing our great area to the outside world! Tourism is the life-blood of many of our communities and there are plenty of other places competing for the tourist dollar. Every year they seem to come up with something… Read more »