Greetings from Cal Expo and the California State Fair

Your Inyo representatives are still having big fun at the fair. Visitation to our exhibit is averaging 1000 per day. Last Saturday we had contact with 1850. People have picked up more 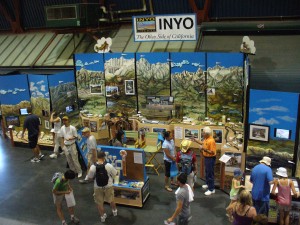 than a ton (that’s 2000 pounds that we hauled in) of information and we’ve run out of most everything.

Visitors continue to be very impressed with the county and the exhibit. As all of us know, most people in California have no clue as to the whereabouts of Inyo County. We’re trying to enlighten them. The Manzanar portion elicits much positive response. Small children are enthralled with the roads, cars, and train engines. Thus far no cars have disappeared, they’re just rearranged occasionally.

A few people from Inyo have identified themselves, but not nearly as many as we would like to see.

We will be dismantling the exhibit on Monday. Has anyone come up with a home for the mural panels? One person suggested auctioning off the individual panels. We have no place to store them at our house. So if no one comes up with a good idea before Monday, I’m all for leaving them in the dumpster here rather than hauling them off to the Independence landfill. I’m anxiously awaiting a positive response from someone.

We work to provide daily news to all of the Eastern Sierra, in the tradition of Eastern Sierra News Service and the Sierra Wave. We bring you daily happenings, local politics, crime, government dealings and fun stuff. Please contact us.
View all posts by News Staff →
Pet Skunked? ICARE Responds
Assault in Bridgeport; Juvenile Arrested