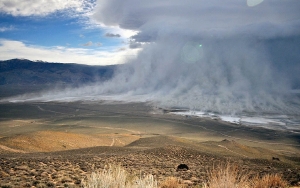 In a long awaited decision, the California Air Resources Board today ruled that the Los Angeles Department of Water and Power is required to construct additional air pollution controls on the dried Owens Lake bed.  The LADWP has opposed existing federal, state and local air pollution control laws because of the cost of the required controls.  LADWP’s water diversions from the Eastern Sierra cause the Owens Lake bed to be dry, creating the largest single source of fine particulate matter air pollution in the country.  Particulate air emissions are a danger to human health and the environment; the particulates lodge deep in the lungs, causing respiratory injuries and additional risks to children and the elderly.  Over the past year, LADWP’s operations have created dust storms exceeding the federal standard on 25 separate days resulting in the issuance of local health alerts.

In late 2011, the agency responsible for enforcing the law, the Great Basin Unified Air Pollution Control District, determined that an additional 2.86 square miles of the Owens Lake bed require dust controls in order to meet air quality standards in the Owens Valley.  The LADWP appealed Great Basin’s determination to the State Air Board and a hearing was held on the issues in Sacramento last June.  The Air Board’s decision supporting Great Basin was released today .

“The State Air Board found in favor of Great Basin on every one of the issues,” said Ted Schade, Great Basin’s Air Pollution Control Officer. “Having across-the-board support from the premier technical and legal air quality organization in the state is very gratifying. The ARB spent an entire year carefully evaluating all the LADWP’s objections and found no grounds for the LADWP’s claims that no additional controls are required.  Great Basin encourages LADWP to move forward immediately to protect the air quality of the Owens Valley.”

Wow! The DWP’s team of lawyers and consultants didn’t win a single argument. I sincerely hope they show better in federal court. Maybe they can try scientific data and factual evidence.

Los Angeles prides itself as going “Beyond Coal”, but they are not “Beyond Dust.” Ask the communities that live around Owens Lake. They say, “Please finish the job!”

Im gonna file suit monday for the hazardous waste the residents had to eat during construction of the Independence 4 lane project. Time to hold the abusers accountable for their actions. Good luck Ted

DWP,, why don’t you quit wasting the taxpayers money on these BS lawsuits and do the work you said you would do in the first place..

A valid question is will LAWDWP still move forward with their lawsuit against Schade and others?

So will LADWP continue with their lawsuits against Schade etc?

Yes, I’m sure their legal challenge in the Federal court will remain. The CA Atty General has assigned 4 attorneys, The Federal Dept. of Justice has assigned 2 attorneys and Great Basin has their own counsel. They will all argue for LA and LADWP to meet their responsibilities. Let’s all… Read more »

So will LADWP continue their lawsuits to prevent them from fixing the mess they created?

It’s funny how DWP wants nothing to do with this land now.