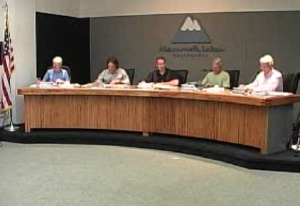 Mammoth’s Assistant Town Manager Marianna Marysheva-Martinez called it “an exciting night” – the passage of the Town’s budget Wednesay night on time and balanced.  What neither she nor anyone else addressed was the second half of the agenda item – what will the Town do in response to the court writ, due June 30th, that demands payment of MLLA’s $43 million debt.

Or, maybe they did address it – sideways.  Sierra Wave Media has calls in to Town Manager Dave Wilbrecht and to Martinez to clarify what the Town will do on June 30th when the writ orders Mammoth to pay the big lawsuit debt.  Clearly, the Town can not pay off the debt in one day, and even a ten-year payment plan allowed by the writ would seem to be out of the question.  We await response from officials.

What Martinez did say in her budget presentation, which had already been said – under the Town’s budget reduction plan, a surplus would be created that would allow payments to MLLA and other creditors but not huge payments.  Bankruptcy may lie ahead.  Mayor Pro Tem Rick Wood commented that there have by necessity been many closed sessions with a “looming, potential bankruptcy.”

Martinez only said that the Town is going through the state-mandated mediation process with creditors and employee groups.  The mandate is in bankruptcy law.  Observers speculate that the Town’s highly paid legal and financial team has advised against greater public comment on the MLLA and bankruptcy issue until the final hour.

As for the budget, the same information discussed over many weeks was repeated with some new information.  Martinez explained the cuts to make up a $2.8 million shortfall.  As Mayor Pro Tem Wood said, virtually all areas of Town government have been cut.  Employee concessions of a 10% cut and 24% for police is expected.  Workers will have to start paying their own retirement contributions.  Airport Manager Bill Manning’s job is gone as is Dave Beck of Public Works, and many other positions have been cut and other lay-offs are possible.  Martinez said the Town will implement the Budget Reduction Plan whether employee agreements are signed or not.

On the revenue side, officials will emphasize transient occupancy tax collection.  Martinez repeated the FTI report data that Mammoth’s citizens are already over-taxed, not wealthy and could not sustain an additional tax burden. So the Town will not try to raise more taxes to pay government bills.

Mayor Pro Tem Wood described the budget process as unlike no other, conservative, and fiscally prudent, arrived at, he said, with no rancor.  Mayor Matthew Lehman called for the vote. The Council approved the budget documents unanimously.

Here is a simple idea. What if a settlement could be reached that gave MLLA a percentage of all TOT for say 20 years. The percentage would be calculated so that if TOT revenues were as predicted over 20 years (obviously an impossible prediction, but seems like those involved could… Read more »

“Martinez repeated the FTI report data that Mammoth’s citizens are already over-taxed, not wealthy and could not sustain an additional tax burden. So the Town will not try to raise more taxes to pay government bills”

Since when has that stopped any Gov agency from Overtaxing its sheeple.
GGW

Why do people keep voting John Eastman into the fracus?
Hasn’t he done enough to F up the town?

upthecreek
Reply to  Still around?

Because they a Sheep and they know No Better
BAAAAAA BAAAAAAAAAAA

That budget is FOOLS GOLD….