By News Staff on January 27, 2012 in Government Agencies/Utilities

A big rig was completely destroyed in Big Pine Wednesday, apparently caused by someone throwing snowballs at vehicles.

According to a press release from the California Highway Patrol, a 49-year-old man from Martinez was driving a 2000 Peterbilt with a 2012 Great Dane Trailer through Big Pine at approximately 32 miles per hour Wednesday at about 8:30 p.m. when an unknown party threw a snowball from the area of the Big Pine Creek bridge, whch struck the vehicle on the windshield sunshade.

The press release states the driver was preparing to pull to the right shoulder to check for damage when he obvserved a 1990 Peterbilt in the northbound No. 1 lane, approaching his vehicle at a speed much greater than his own. The 1990 Peterbilt, driven by a 25-year-old Riverdale man, was also possibly struck by a snowball from the same area.

Both vehicles came to rest upright and blocking the northbound No. 2 lane.

Both drivers suffered minor injuries; there were no arrests in this incident. 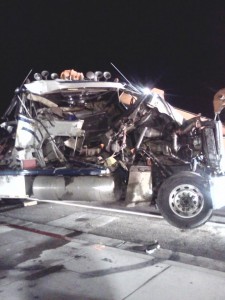 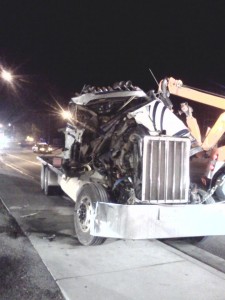 I had a water balloon go right through my windshield when i was driving only 25 mph. kids don’t realize the danger…