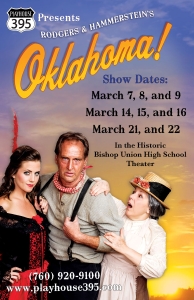 You’ve heard about it and now you’ve got to see the live performance of Oklahoma! while there is still time. The captivating Playhouse 395 production everyone is talking about runs this weekend and next at the Historic Bishop Union High School Theater. The singing, dancing, laughs, romancing and eerie drama in the classic Rogers and Hammerstein Broadway spectacular brings to life the settling of the mid-west and the conflicts between cowboys and farmers in the early 20th century.

“I thought it was wonderful. The local actors were fantastic and I still can’t believe that they are all volunteers,” one show-goer was overheard saying after the play last Saturday night. Another said, “We never miss a Playhouse 395 show. They’re always fun, entertaining and really well done, and the live orchestra adds so much to the performance. I think Oklahoma! is one of the best shows Playhouse has ever done.”

The final six Oklahoma! performances run March 14, 15, 16, 21 and 22. Tickets are available at www.playhouse395.com or by calling 760-920-9100. Last Saturday night’s and Sunday’s matinee performances nearly sold out so get your tickets today!

We work to provide daily news to all of the Eastern Sierra, in the tradition of Eastern Sierra News Service and the Sierra Wave. We bring you daily happenings, local politics, crime, government dealings and fun stuff. Please contact us.
View all posts by News Staff →
Opinion: Democracy takes work
Mammoth family helped by Mammoth Housing

For those of you who have not seen Oklahoma yet, there is only one more week-end left and it is a fabulous performance. I can’t believe the talent in our area. Thanks to all of the folks that worked hard to put this on. It is truly a labor of love. So much attention to detail in the set designs, and even the decorations outside the high school auditorium are amazing. All of you folks behind the scenes, on the stage and in the orchestra are so appreciated by those of us in the audience. Thank you!