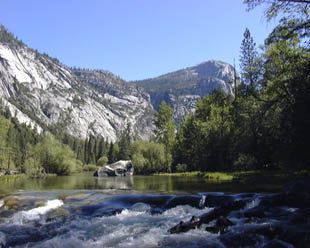 National Park Investigators have another death to look into, after a 23 year old concessions employee fell from a cliff possibly on Sunday.

On Saturday, a 40 year old man from San Ramon, died after falling from the Half Dome cables route in poor weather. 41 other people had to be helped off the top of Half Dome after that fatality. Park Officials say that 23 year old Christopher Hale of Gainesville Florida, had been reported missing Sunday morning. His body was found at 1:00 pm on Monday. Park officials report that it appears that Hale fell from an unnamed cliff face above Mirror Lake in eastern Yosemite Valley.

Hale was an employee of DNC Parks and Resorts at Yosemite, Inc., the parks primary concessionaire. He was in training in Yosemite Valley and was slated to work at White Wolf.

The exact cause of death and other details remain under investigation.

We work to provide daily news to all of the Eastern Sierra, in the tradition of Eastern Sierra News Service and the Sierra Wave. We bring you daily happenings, local politics, crime, government dealings and fun stuff. Please contact us.
View all posts by News Staff →
Schienle holds press conference
Eastern Sierra Academy In the Spotlight For Excellence