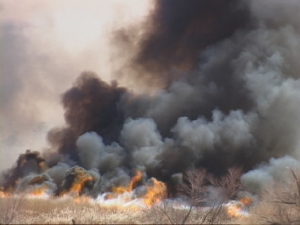 The River Fire in the Owens Valley had burned 407 acres and was 85 percent contained as of midday Wednesday. Cal Fire Public Information officer Bill Peters said it has been determined the fire was human caused, and the investigation is continuing.

CAL FIRE San Bernardino Unit fire fighters are continuing their mop up and containment efforts on the River Fire that broke out Sunday morning, first to CAL FIRE at 8:17. The fire was already spreading rapidly in a riverbed east of Lone Pine.  The fire was pushed by winds up to 25 mph.

Highway 136.  Had the fire crossed to the south side of the highway, fire officials say the fire could have potentially burned several thousand additional acres.

No structures were threatened during the fire.  there was a threat to high power lines owned by the LADWP and to some grazing cattle, but the threats were averted.  Two local volunteer fire fighters sustained minor injuries on Sunday. One was smoke inhalation and the other was debris in the eyes.  Both were treated and released on Sunday.  Additional firefighting resources responded to the fire from the CAL FIRE San Diego and Fresno Units and the Cleveland National Forest as well as resources from the LADWP, California Highway Patrol and the Inyo Sheriff’s Department.

The high winds on Tuesday caused a couple of spot fires outside of the fire area.  These were quickly extinguished by the fire fighters who were working on containment and mop up.  The fire is currently at 407 acres and is 85 percent contained and human-caused.

CAL FIRE officials expect to have the fire 100 percent contained by 6:00 P.M. Thursday. The fast response and fire fighting that basically stopped the fire by Sunday evening is an excellent example of cooperative regional fire protection.

The River Fire east of Lone Pine now stands at 85% contained, according to Cal Fire, with 407 acres burned.  Lone Pine Fire Chief Leroy Kritz had said Sunday, when the fire started, that the origin was somewhere near the dump.  Very high winds quickly spread the fire in both directions.  It burned to the south of Narrow Gauge Road and north of Highway 136.

The cause of the fire remains under investigation. Cal Fire said 234 firefighters have worked the River Fire with eleven engines, six crews and two water tenders.  Full containment was expected Thursday, depending on wind and conditions.

Crews from many agencies descended on the fire – volunteer fire departments from Lone Pine, Big Pine, Independence, Olancha, Bishop and Wheeler-Crest, according to Fire Chief Kritz.  Other responders include Cal Fire, the Inyo County Sheriff, US Forest Service, BLM, and LADWP. In addition to local units of Cal Fire, the agency sent up engines and hand crews from Southern California.

At last report there were two injuries.  No other details about that were available.  No structures were threatened or burned.