By News Staff on April 8, 2014 in Government Agencies/Utilities

(Press Release) Agents with the Inyo Narcotics Enforcement Team (INET) concluded a drug investigation in the Bishop area into the sales of methamphetamine.  The investigation resulted 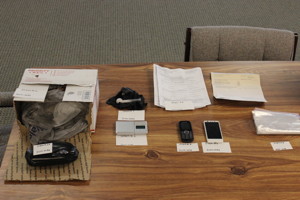 in one arrest and the seizure of a large amount of drugs.

On the evening of Friday, 04/04/2014, INET Agents along with the assistance of the Inyo County Sheriff’s Department, conducted a search at a residence on Tu Su Lane.  The search was part of an investigation into Dustin Anthony Smith (age 26), a resident of Bishop, for the sale and possession for sale of methamphetamine.  At the residence, INET Agents seized approximately one pound of methamphetamine which resulted in the arrest of Smith.

knuckleheads original question was whos winning this battle, the answer is ……..dentists ,

Knucklehead was a very relevant thing to call me in my juvenile days, thankfully I have emerged to respect the world around me and not listen to the propaganda that is force feed from many angles… Unfortunately the Earth is loosing the battle, and we have “knuckleheads” that convince themselves… Read more »

I pretty much agree with what you say. I might say it different but mean the same thing. The U.S. is a corporatocracy that is bought and paid for by big business. Elected officials are just the winners of the money contest called “Fund Raising”. As for drugs. If some… Read more »

If you knew that we’re all in this together, perhaps you would have more understanding and concern for others instead of disdain.
Benett Kessler

they do exist
Reply to  Ken Warner

I like your post, but have to disagree about he aliens and angles comment. First of all, I’m a hard core Athiest, and I do not believe in god. However, I do believe that Angels do exist (just not the kind you read about in scripture.. or maybe they are!).… Read more »

Ken Warner
Reply to  they do exist

I guess I have a hard time with this notion that somehow law enforcement and the courts are invested in continuing drug abuse because it keeps them employed. I know there is a lot of dishonesty in government but that claim is beyond what any reasonable person can stomach. I… Read more »

Bring some facts DT, What is Gov’t for? Gov’t is for the inefficiencies of the economy, that being said it is obvious how out of control our Gov’t has became… Gov’t no longer regulates business, Business regulates gov’t in this current normality.. with that backwards approach anything that has to… Read more »

It HAS to be pretty much common knowledge of how addictive & nasty meth is, RIGHT ? So what is it that makes an individual take that very FIRST hit off a pipe, KNOWING what the dire consequences will be ??? There are tons of photo’s online of before and… Read more »

And “thou shall not kill”, how well does that keep people from doing that to another… Just look how “glorified” drugs use and all the bad elements are on TV, Movies, etc… how does a developing teenager look at such portrayals, ad the factor of not having the household structure… Read more »

Rick, There has to be a system reference, You can’t have any behavior in a system that isn’t reinforced by the system, if it’s not structurally reinforced, it doesn’t matter what your moral codes are, people are going to continue to deviate towards what is working, and corruption and abuse… Read more »

The Aggressive Progressive
Reply to  chris

Yes correct, in a general perspective “poverty” is a lead indicator of child abuse, I wasn’t limiting it to the poor, I was just stating another downfall of our current economic realities, and the perpetuation of..

Here’s is a interesting interview, It shows how in history, when people side with the “Bad crowds” within the cultural norms at the time, we gain and have gained (as humans) a lot of freedoms today we take for granted…

Aggressive Progressive……You ask who’s really winning the battle on illegal drugs….What do you suggest doing ?…..certainly not suggesting just making them all legal……are you ?…………Meth,and other hard drugs aren’t the same as pot…..pot just makes you stupid and lazy…..meth brings on a lot of bad things,not only to the user,but… Read more »

Well thanks for asking Wayne, allow me to further explain myself; I ask who is winning the battle because it seems the one who is on the “good side” of this issue is loosing (Law Enforcement) and the people that this effects directly and indirectly are loosing also, and it… Read more »

I’m telling you folks, this stuff is as cheaper as it ever has been, and now people can order it online… like it or not it’s a fact! So who is really winning this battle?? Oh but good job to law enforcement for dealing with the surface manifestations of a… Read more »