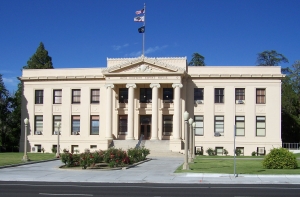 Last year, after consideration of two proposals for 18 months, the Inyo Supervisors decided to exclusively negotiate with Joseph Enterprises of Bishop for the building of a new county office complex at the Wye.  When will the public have a say on this major project?  County Administrator Kevin Carunchio said there are several opportunities ahead.

The multi-million project had drawn out citizens in opposition who wanted such plans to go to a vote of the people.  That effort fell flat, but concerns remain – like the big price tag and the investment in Bishop instead of the county seat.  CAO Carunchio assured that the project includes phases.  The first phase involves an agreement with Joseph Enterprises.  He said that this document will go public before the Board of Supervisors. This may happen at the end of February or soon after.

Carunchio said that even if the Supervisors approve the agreement, there is no county commitment.  The next step points to space and planning.  This also goes to the Board of Supervisors for public discussion and a vote.  This too is not a binding document.

After these steps, the Supervisors will consider binding documents with Joseph Enterprises.  CAO Carunchio said that typically all of these matters would take place in closed session.  “We’re being as transparent as we can be,” he said.  Last September during a discussion of this project, Carunchio said that the cost of the project could add up to $15 million.  He also said that a proposal under consideration was to swap county-owned land near Jack in the Box for land owned by Joseph Enterprises at the Wye where the building would go up.

Wouldn’t it be great if our schools got 33 million? That’s 16.5 mill per Judge. And we already have two court houses. One for each.

The State of California says it is broke, Inyo County says it does not have any money and I for one taxpayer am also cash strapped. So why do our elected officials keep trying to get more from the taxpayers to pay for something that they (the government) want? I… Read more »

Why not put it at the Cottonwood? I’m tired of looking at that mess!

Not fancy enough or expensive enough. Exclusive negotiations, isn’t that against the rules of putting something out to bid?

Eyesore it is. But the Cottonwood Center would likely not pass various codes like ADA and so on. The BLM had offices there for quite a while so perhaps I m wrong.

just keep spending taxpayer money you will never have.

After all it’s SO EASY,