By News Staff on March 2, 2012 in Government Agencies/Utilities 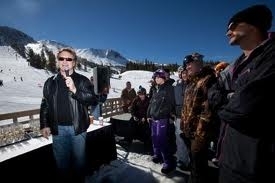 Mammoth Mountain CEO Rusty Gregory’s post on the Mammoth Forum reveals still more about Wednesday’s layoff of 75 year-round employees, including his own emotional response.  His post includes a link to the letter that all employees received:

Hi guys,Yesterday was an awful day. Instead of trying to answer your specific questions or comment on this thread, I’ll give you a short explanation of why we laid off 75 of 359 total year round employees with an average length of service of 10 years. This layoff is the most severe reduction in our work force since 1991 when 150 employees lost their jobs in what is now known as Black Monday.

Yesterday’s layoffs are an extension of cost cutting that began on January 1. With no snow on the horizon or on the ground, other than what our snowmaking crew had provided, and with 30% less revenue coming in each day than we expected, costs needed to be cut. First and foremost, we didn’t and won’t try to save money by cutting back on mountain or guest operations. You can count on us keeping all facilities open at Mammoth according to our normal winter schedule as long as there is sufficient snow to ski to those facilities. You can count on us operating all facilities through the spring break holidays when we close typically Canyon and Eagle. We will operate the primary lifts around Main Lodge to the top of the mountain for as long as the snow lasts up through the July 4th holiday. You can count on us opening next year as soon as there is enough natural snow to ski Chair 1 or the first Thursday in November if we have to rely on manmade.

Starting after the New Year holiday, we cut non employee expenses wherever we could and began reducing the hours of seasonal employees, cutting many to 0 hours. We then reduced our year round hourly employees significantly, in some cases down to 20 hours per week. We provided free meals at Canyon Lodge to keep our seasonal employees in town and help with expenses for our year rounder’s. We crossed our fingers for snow by mid-January. Snow finally came on January 21st, but unfortunately skiers and snowboarders did not – at least not in the numbers we expected or needed. Realizing this was no ordinary drought and that the market was not going to follow the patterns of the past, we cut more expenses by cutting year round salary employees pay 10% and I cut my pay 15%.

It snowed a couple more feet right before the President’s Holiday and we had our first busy weekend with 16,500 visits on Saturday and 17,500 on Sunday, which was by far the best weekend all year although still less than typical 20,000 visits per day for this holiday. The following week visits trended back down to the season average and has stayed there ever since. If this trend continues and I see nothing on the horizon that indicated that it won’t, we will bring in $40,000 million less in revenue this year than last year’s total of $140 million. We simply don’t have enough money coming in to pay the expenses for the size year round staff we are carrying. Cutting seasonal employees further would require us to reduce operations and I WILL NOT DO THIS. Additionally, by March 15, we will be in breach of our loan covenants, which means that the bank will make us cut expenses aggressively. I decided to cut year round jobs. I believe that if I didn’t act yesterday that I would be causing many more job losses later this year. I learned this painful lesson in our slow response to the circumstances that led to Black Monday and the layoff of 150 employees referenced above. This is no one else’s decision other than mine. Barry Sternlicht didn’t tell me to do this. Neither he nor any of our other partners has told me to do anything. They remain supportive solid partners and friends.

Monthly revenue is running $10 million less than last year. I had 5 days of meetings with my top managers to figure out which year round jobs to eliminate in order to save $500,000 per month. We did our best to cut jobs that would not directly impact the day to day operations of the mountain or guest services. Management and higher paid jobs in administration, IT, accounting, and maintenance took the biggest hit. 2 VP’s were let go. I delivered the news personally to the 10 employees with the longest tenure with the company, from 28 to 44 years. I am still crying. But my pain is nothing compared to the pain and hardship I have burdened 75 top performing, long time employees and their families with.

The majority of the 150 employees who were let go on Black Monday in 1991 were rehired by the company within 1 year. I hope and pray that this will be the case again. Because I know you Forumites care about our people and like to know the details I have included the letter that each laid off employee received.

We work to provide daily news to all of the Eastern Sierra, in the tradition of Eastern Sierra News Service and the Sierra Wave. We bring you daily happenings, local politics, crime, government dealings and fun stuff. Please contact us.
View all posts by News Staff →
Update on reported medical office burglary
Home break-in and pursuit in Chalfant
9 Comments
Newest
Oldest Most Voted
Inline Feedbacks
View all comments

Sounds like they are on the same path as the Dodgers owner. Scream bankruptcies then walk away filthy rich. Time will tell.

Here’s an OpEd from 2005 when Starwood bought most of MMSA. http://articles.latimes.com/2005/oct/09/opinion/op-mammoth9 “CAN YOU HEAR IT? That’s the sound of the fat lady singing. She’s up at Mammoth Lakes, Calif., announcing the denouement of a set-piece performance that seems so completely, well … expected. Mammoth Lakes is the latest in… Read more »

So tell me… How much does a condo/apartment sell for in the Village? Now

Have you taken more than the 15% pay cut that you took when you gave me a 10% pay cut? As I have taken a 100% pay cut, Go on match me, You can afford it more than me, People matter, Performance matters. your mantras. I did both, do whats… Read more »

my family and i were around in ’91 for those layoffs. difficult times, the fire dept handed out food baskets so that many low income families could survive. nevertheles, local families stuck together and managed to pull thru. everyone here would llove a big fish to go under, unfourtunately, it… Read more »

Should Rusty go or should he stay? Thumbs up to stay or Thumbs down he goes.

Rusty how much have you borrowed from the banks? It seems after a record year there would be enough to weather a bad season, after all droughts do happen. From I have been told your budget for 11/12 was higher than the previous year. What made you think this would… Read more »

“Additionally, by March 15, we will be in breach of our loan covenants, which means that the bank will make us cut expenses aggressively”

There you have it.. the problem with MMSA and the Town of Mammoth lakes.

Run by a bunch of Banksters

Your daily sarcastic remarks seem less and less important each day. If you had some balance, maybe bloggers would take you more seriously…