When called by the Mono County Sheriff’s Office, the team responds for searches and rescues at any time, in any weather, for as long as it takes, for free. Each year, the Team honors members for their individual excellence and public service. 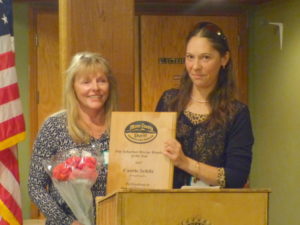 The team’s primary honor for achievement is the Pete Schoerner Rescue Member of the Year award. The award is named in memory of a beloved teammate who died in an ice climbing accident in 1996.

The Pete Schoerner Rescue Member of the Year for 2017 is Carole Schilz. Carole serves the Team as the current President, Board of Directors member, and as an active responder to search and rescue calls. Since joining the team in 2007, she has responded to 351 team events.

New members in training are called Candidate Members, and must undergo training, practice, and testing in eighteen skill categories before being considered for advancement to Rescue Member.

Examples of these skills include first aid and victim care, tracking, technical rescue, mountain navigation, helicopter operations, and skill with electronic aids such as computers, radios, avalanche transceivers, and GPS receivers. Completion of all requirements takes a lot of dedication and faithfulness over a period that is typically a year or more. 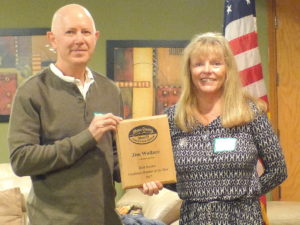 The team honors one candidate member each year with the Rick Mosher Candidate Member of the Year Award. Rick Mosher is the only team member to have died in the line of duty while searching in a small airplane that crashed during an operation on August 15, 1979.

This year the team selected Jim Wallace as the Rick Mosher Candidate Member of the Year. Jim is very active in many aspects of response to calls, training, and team readiness. Since joining the team in April of this year, he has participated in 61 team events. 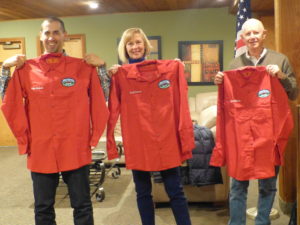 New members who completed training and testing to advance from Candidate to Rescue Member status were awarded with red Team uniform shirts.

They are Cheryl Buchanan, Eric Kaufman, and Jim Wallace.

The team’s history goes back to 1966, and hundreds of members have come and gone as their lives changed. Steve Case joined the team in 1992, and is the first member to achieve a 25 year tenure. He has been a faithful, reliable, and key player in hundreds of search and rescue calls in all weather conditions, and has also served on the Board of Directors and been a teacher of methods and techniques.

He was awarded the first Golden Carabiner Award for his 25 years of excellent service.

Bill Greene received an award for 20 years of service. Bill has been a very active member since 1997, and has responded to 527 search and rescue calls and over a thousand team events. He has been a frequent Operations Leader, teacher, and technical expert for many things, and also serves as Chief Financial Officer for the volunteer corporation.

Awards for ten years of service to the Team and victims were presented to Marie French, Brad Schilz, and Carole Schilz. The 2017 honorees were presented with laser engraved wood plaques at the awards dinner December 10. 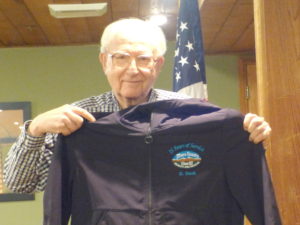 Don Deck started the Team’s website in 2001 and joined the Team as a Support Member in 2002. Don has contributed literally thousands of hours of behind the scenes work in support of the team as webmaster, database administrator, and record keeper for over 15 years.

He has now chosen to retire, and was presented with an embroidered logoed jacket by team president Carole Schilz. The SAR team wishes to thank members of the community for their generous support.

One in a million chance: Belted Kingfisher survives
‘On the Road to the High Sierra’ with ECM calendar
3 Comments
Newest
Oldest Most Voted
Inline Feedbacks
View all comments

Whoever gave a thumbs down on the above comment must be one, miserable SOB .

Hats off to these men and women who spend their time learning the many skills of operating in the wilderness and mountain environment on their own dime. The work they do has made a critical difference each year to those injured or lost in the Eastern Sierra. Well done.