On Thursday, June 30, ten members of the first Mammoth Lakes Community PoliceAcademyreceived Certificates from Police Chief Dan Watson for completing their eight weeks of training and celebrated with a barbecue at the Police Station.  TheCommunity PoliceAcademy was recommended by Officer David Scobie who became aware of a similar program while visiting relatives in Oregon.  Officer Scobie volunteered to coordinate a similar program in Mammoth Lakes. 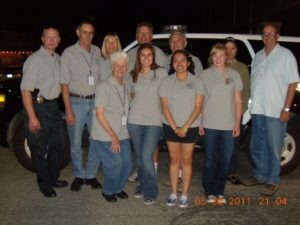 The course consisted of eight weekly hour sessions of three hours.  The topics included tours of the police station, use of force, firearms training, narcotics, DUI, traffic enforcement, and meeting with the District Attorney.  Nearly every member of the Police Department served as instructors.

Chief Watson said, “The purpose of the Community Police Academy is to educate the public about what their police department does, why and how they do it.  Graduates come away with a much better understanding of the criminal justice system and the role the Police Department plays in keeping the public safe.”

It is anticipated that future Community Police Academies will be held approximately every six months, depending on community interest.  Anyone interested in attending a future Academy should contact Officer Scobie at (760) 934-2011 X55, or at [email protected].

The following comments are from three of the students:

Thank you and your team for this excellent course.

The 8 week Mammoth Lakes “Community Police Academy” was most interesting and informative.  I was not sure what to expect when I signed up, I’m sure pleased that I did.  Acting out traffic stops, breaking up fights, crowd control, etc provided a unique insight to the real time decisions that police officers face daily.  Hands on experiences with fire arms and sobriety testing was awesome.  Videos of traffic stop action from police car cameras, crowd control and dealing with very aggressive people was eye opening.  While not part of the academy a “ride along” in a patrol car was invited/encouraged.  This was an excellent opportunity to see inside police work.  I recommend residents of Mammoth sign up the next time the academy is offered.  A “ride along” can be scheduled at any time just visit the MLPD office on Old Mammoth Road and fill out a request.

I thank the dedicated members of the Mammoth Lakes Police Department for the effort they put into this community awareness project.

First of all…thank you for allowing Officer Scobie (and all your other officers!)  the opportunity to attempt to ‘educate’ civilians about your profession.   Quite an eye-opener.

“Living in our spectacularly gorgeous environment, I manage to over-look the human ugliness closer at hand…the underbelly of our town.  The Community Police Academy exposed me to experiences, situations, crimes and gangs that I did not know existed in our little paradise.   Somehow, my path by-passes this sub-culture.  I’m grateful to understand all of this more fully, especially what our police officers face on a daily basis.  Thank you, MLPD, for all that you do for our community 24/7/365.

Again, Dan, please thank your staff…they did an outstanding  job.   Dave Scobie deserves a shiny star in his cap for putting up with all us neophytes.

Thank you for allowing Officer Scobie and all the officers who contributed their time and expertise to the first ML Community Police Academy. They are an exceptional group of officers and have a true desire to provide public safety to the Town of Mammoth Lakes.

The 8 week course gave me a far greater understanding of the multiple tasks MLPD officers must perform routinely.

I took special interest in the demonstration on traffic stops. It gave me a better understanding of why police departments handle those situations the way they do. I now understand why backup officers are warranted.

I would hope that future classes will be offered by the department and attended by citizens of Mammoth. Very informative. Time well spent.

Please extend my thanks to all who contributed
to this invaluable project .

Good article, however your headline is incorrect. This is not MLPD’s first citizens’ academy. Previous academies were held in the late ’90s/early 2000s. Glad to see them resume.

MLPD puts on a very informative and worthwhile program that gives community members a much greater insight into the challenges faced by law enforcement and the forum troll brings up…..Pensions. You really need to read these a bit more thoroughly before you start beating on that tired,dead horse of yours.

Does this mean Future cops(Public Servants) will Not be getting Pensions?

Thanks MLPD for putting on a very worth while program. Hopefully more citizens will take advantave of this open type of government. There are two sides to every story.