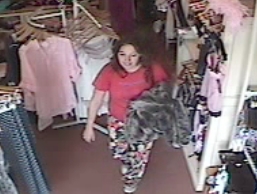 Police say this is the suspect in the TONIC burglary.

Two burglaries reported at two different businesses in Mammoth Lakes this week. Mammoth Police have asked for the public’s help in identifying suspects that were videotaped by surveillance cameras.

The owner of TONIC reported that on Tuesday March 27, at about 2:30 in the afternoon an unknown female suspect entered her store and stole a “Free People” purple crochet women’s sweater and a gold & silver metallic “Elise” women’s dress belt.

The owner described the suspect as a female white, 5’7” tall, about 140 pounds, straight long dark colored hair, wearing a grayish fur coat, pink colored short sleeve shirt and what appeared to be loose fitting sweat pants with a floral design.  The suspect then exited the business without attempting to pay for the stolen items. 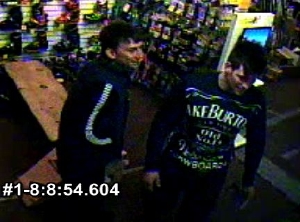 Two suspects were captured on surveillance tape at Mammoth Mountaineering.

The owner of Mammoth Mountaineering related that on March 24, between 8 and 8:30 in the morning, two male adults entered his store and stole a “GoPro” HD Digital video camera and additional accessories.  One of the two subjects had cut the metal security wire that secures that “GoPro” to the display. The second subject involved stole accessories off the display and shoved them down his pants.

Anyone with information regarding these three suspects should contact the Mammoth Lakes Police Department immediately. 760-934-2011.

Mammoth Town Council has no comment on MLLA, approves $4.4 million internal loan
Town Manager says there is a plan

I hope the police have a picture of these people really taking these items. Based on what I see here these people look like any other shopper would.

Opps, maybe i should have read the last part of the story 🙂

It might be helpful to be able to click on these photos and then enlarge them for a better chance to ID these people. Just saying….? Kinda difficult to get a decent look at their faces.

i doubt they’ll be identified as they are probably from out of town.

I was thinking more on the lines of they WILL probably be idenified cause chances are they ARE locals..I’m not a thief,but if I were,it would be a dangerous practice to go into a store you know nothing about, a long way from home and do what they did unless you checked things out,and knew some things beforehand….especially the two guys with the hair,and what they were able to get away with..If would check out the stores that sell the type of t-shirt that one guy has on,and see if they might know who he is….

Gotta ask….Where were the cashiers when these people were wandering around putting merchandise down their britches?….The store’s don’t look too big,nothing like a K-Mart or a walmart…and doubt either store was brimming with lots of business or customers. That said,I hope with the surveillance tapes they will get caught.

I would bet they were either texting or talking on the phone.
Ever seen some of the kids who work in these stores? Not to excuse any theft in any store at any time but geez take a look at what employers pay these employees. I don’t know how they eat and pay rent.
What’s the old adage? “You get what you pay for.”
Another one… “Good help is hard to find”
It seems everyone wants something for nothing employees, employers and of course shoplifters.
Now I’m going to work.

dingo, really? – do you personally know the employees at either of these locations? If you don’t, you shouldn’t be so quick to judge. You sure they are “kids” too busy texting or talking on the phone? How dare you imply that “good help is hard to find” at Mammoth Mountaineering. We shop there all the time. The staff we’ve encountered have all been very helpful, hardworking and most seem to be die hard, seasoned mountaineers, skiers, climbers and gear heads in their own right which is why they choose to work there. A couple of the guys are longtime locals, around my age (!!) and if they’re anything like me, may not even know how to text because they’re too busy working hard and playing hard! I’m not so sure any of them would appreciate your erroneous assumptions about their slacker work ethic or your general implication that the theft was an employee’s fault.

good help IS hard to find. Ask any business owner. Where did I call anyone a slacker?