By News Staff on February 8, 2012 in Government Agencies/Utilities 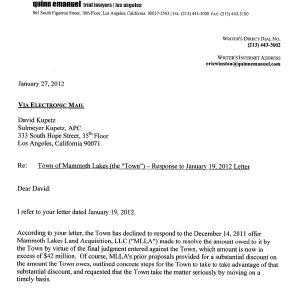 On Tuesday, February 7th, Jay Becker of Mammoth Lakes Land Acquisition emailed the following letter to Sierra Wave and other media.  Since then, Town of Mammoth officials have issued a press release and made statements about the Town’s intent to continue negotiations with MLLA.  That company, as we have reported, filed a petition with the court to force The Town of Mammoth to pay  the full $42 million debt.  We have quoted from the below letter but post it now for full public consumption.  The Town’s response follows this letter in the form of a press released after this MLLA letter went public.

According to your letter, the Town has declined to respond to the December 14, 2011 offer Mammoth Lakes Land Acquisition, LLC (“MLLA”) made to resolve the amount owed to it by the Town by virtue of the final judgment entered against the Town, which amount is now in excess of $42 million. Of course, MLLA’s prior proposals provided for a substantial discount on the amount the Town owes, outlined concrete steps for the Town to take to take advantage of that substantial discount, and requested that the Town take the matter seriously by moving on a  timely basis.

Please note that we do not treat this letter as a confidential settlement communication.

It is shocking that the Town, more than a month after MLLA made its good faith proposal, chose to cease settlement efforts. But what makes matters worse is the conduct of the Town between December 14, 2011 and your January 19, 2012 letter:

•   On December 22, 2011, you wrote: “The Town has scheduled a special closed session on January 10 to discuss the latest offer from MLLA (dated December 14, 2011). This is the earliest that all Council members and Town managers are able to meet, given the holiday schedule.”

•   On January 4, 2012, the Town conducted a closed session during which it discussed the matters relating to MLLA.

•   Following the January 4, 2012 closed session, Marianna Marysheva-Martinez was quoted in the press as indicating that the Town faced “three basic options. One, the settlement discussions now going on. Two, if talks fail the two sides will go to mediation. Three, the final step would be bankruptcy. Martinez made it clear that before the Town would ever consider bankruptcy, officials would have to fully exhaust other options which include current attempts to arrive at an agreement.” See
http://sierrawave.net/9463/debt-negotiations-continue (Jan. 4, 2012).

•   Ms. Marysheva-Martinez was reported as also stating: “Martinez also explained that the Town’s payment of the debt could be handled through what’s called a judgment bond. The Town would borrow the money to pay MLLA. While Town officials had hoped to reach an outline of settlement by the end of last year, they still hope they can reach an agreed on plan with MLLA.” See “Debt Negotiations continue in Mammoth,” http://sierrawave.net/9463/debt-negotiations-continue (Jan. 4, 2012).

•   On January 10, 2012, you e-mailed me, stating: “The Town Council met in special closed session earlier this afternoon to discuss the December 14 offer from MLLA and to consider responding to that offer. Due to scheduling constraints, the Council did not have an opportunity to fully consider the issues. A continued closed session has been set for January 18th. Meanwhile, I have attached an updated proposed standstill period extension agreement.  Please let me know if your client agrees to the extension.” Your draft had the standstill going to February 13, 2012. At no time did you indicate that the Town was going to withdraw its prior offer and refuse to provide a counter-offer.

•   Based on the Town’s representations in December and January, MLLA agreed to extend the standstill to February 1, 2012, and I provided to you the executed standstill agreement on January 12, 2012.

•   On January 17, 2012, it was reported that “[i]n a special meeting scheduled for 1:30 pm Wednesday, the Council’s only item is a closed session on MLLA matters. Last week the Council also met in a special closed session on the same topic. Earlier, Mammoth Financial Consultant Marianna Marysheva-Martinez had said that MLLA sent the Town a proposed settlement in mid-December. Last week, she said, the Council planned worked on a responding proposal.” See “More Closed Sessions on MLLA.”
http://sierrawave.net/9653/more-closed-sessions (Jan. 17, 2012).

By all accounts, until your January 19, 2012 letter, the Town was representing to MLLA and to the public that the Town fully intended to act in good faith and to respond with a counterproposal. All the while, the Town has benefitted from a standstill, paying zero on the judgment and letting millions of dollars in interest accrue.

It bears reminding the Town that after the Town lost on appeal, it was MLLA that reached out to initiate resolution discussions, and indicated a willingness to enter into a standstill. MLLA has extended that standstill seven times. MLLA representatives made several trips to the Town in order to work with the Town’s staff in order to identify the Town’s core needs and better grasp the Town’s financials, all with a goal towards a consensual resolution.

The Town has completely failed to follow through on the representations. Its conduct smacks of bad faith. Please be advised that MLLA will not be agreeing to any further extensions of the standstill agreement when it expires on February 1, 2012.

Town of Mammoth Lakes, California – February 07, 2012 — Since April 2011, the Town of Mammoth Lakes has been negotiating with Mammoth Lakes Land Acquisition (MLLA) in an attempt to reach a settlement of the judgment MLLA obtained against the Town, arising out of the Hot Creek development project. As part of those negotiations, the Town has made full, complete and ongoing disclosures of all of its financial and operational information to MLLA. Frequent closed session discussions have taken place among Town Council members and staff to develop and present to MLLA payment proposals that the Town could afford, keeping in mind its obligation to provide essential municipal services to the community and visitors.

On December 1, 2011, the Town made a multi-million settlement offer to MLLA – an amount that the Town currently feels it cannot afford to pay, in light of the worsened fiscal conditions since early December. On December 14, 2011, MLLA requested an even larger payment.

On January 19, 2012, the Town withdrew its December 1 offer, writing to MLLA: “In light of current fiscal realities, the Town has determined that it needs to more closely analyze and assess pertinent issues with financial implications, including the ongoing efforts to reach a resolution with MLLA. The Town has begun the development of a global restructuring plan, which will address the various fiscal issues impacting the Town.” The Town’s January 19th letter further stated that another settlement offer would be presented to MLLA after February 1, 2012. Since then, the Town has continued to work on a sustainable plan to both pay MLLA and satisfy its other fiscal obligations. Frequent closed session discussions continued.

In the meantime, it is MLLA that decided to abruptly stop settlement discussions with the Town. To the Town’s surprise and dismay, MLLA filed a petition with the State Court on February 2, 2012 (and served the Town on February 6) to demand payment of the full $42 million legal judgment. MLLA then went to the local media and accused the Town of bad faith negotiations. All of this was done without an advance notice to the Town, or any indication that MLLA was about to cease the settlement process. Sadly but clearly, MLLA is the one acting in bad faith.

The Town will, after careful consideration of its obligations to the citizens, businesses and taxpayers of the Town, submit to MLLA in the near future another settlement proposal that the Town can afford consistent with its stewardship of the public’s funds.

Reality Bites, get over it. MLLA won in court and now they want their money.

Why doesn’t the town just give them the airport and tell them to build whatever they want.
Who would stay out there anyway?
Give it to em!!!

With situations like this, it is no wonder the state and local agencies are going broke. $47 million that the town has to pay to this corporation.

Troll or not… P&B speaks the truth when it comes to our suspect politicians who are horribly underserving our community…. ever hear of the old saying… “the truth hurts…”

Let’s see – How do you know when the Town administration isn’t telling the truth? Oh, when any of it’s representatives are moving their lips. Wilbrecht and 3M are just “front people” for the machinations of the suspect politicians and to date have not shown that they can be trusted.… Read more »

How can you identify an MLLA troll? Look at P&B’s comments. MLLA are not the victims of anything. They bought the lawsuit. They are simply economic bottom feeding prostitutes.

The town followed the advice of their town attorney. MLLA should be sueing him.