By News Staff on December 18, 2012 in Government Agencies/Utilities 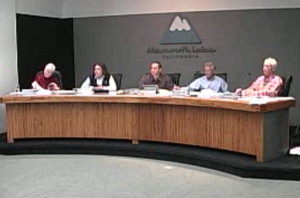 The Mammoth Town Council’s regular meeting Wednesday night does not launch into any more restructuring of Town government, but the agenda does deal with some related issues.

The first policy matter on the agenda is a resolution that cancels the long-troublesome Development Agreement at Mammoth Lakes Airport. This Development Agreement was at the heart of the legal dispute that led to Mammoth’s deal to pay off more than $30 million in debt. The cancellation of the Development Agreement is one of the concessions that the Town of Mammoth got out of their negotiations with MLLA and Terry Ballas.  That’s done, and Mammoth’s payments to both of those parties are underway.

Before the 6pm regular meeting, the Council planned to meet with the Recreation Commission in a 5pm workshop to talk about 2012 Fall Measure R applications.  During the meeting the Council may approve the Measure R Fall funding recommendations as proposed by the Recreation Commission.  This does not include paying for Whitmore Pool and Park as discussed.  The Town Council earlier voted to find money in the budget to keep the facility open now and then discuss the future later.  The Measure R funds up for allocation amount to $164,431.

The Council will review the Main Street Project Work Program and consider appointment of a Town Council representative to the Downtown Working Group.

They are going to give him millions and then allow him to walk away from the town heist.
Shouldn’t Mammoth get something in return, anything?
A condo at the airport, ah, who would stay there away???