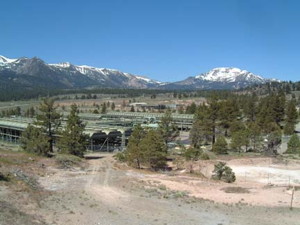 The Mammoth Community Water District Board of Directors has authorized the filing of appeals to the decisions issued by the US Bureau of Land Management and the US Forest Service concerning the Final Joint Environmental Impact Statement /Environmental Impact Report (Final EIS/EIR) for the Casa Diablo IV Geothermal Development Project.

The Mammoth Community Water District (Water District) has serious concerns about the negative impacts the proposed Casa Diablo IV Geothermal Plant Expansion Project (CD IV) could have to local groundwater and surface water resources.  To protect the water resources used by the community, the District will be filing appeals to the BLM and USFS decisions to approve the proposed CD IV expansion project.

In order to protect the community’s water supply, the Water District is seeking a comprehensive, robust monitoring and mitigation plan with “trigger points.”  The plan would protect the community’s water resources through the drilling of monitoring wells, aquifer stress tests ahead of project construction, inclusion of “trigger points” to reduce or cease CD IV operations if the project impacts the Water District’s groundwater and surface water supplies, collection of additional water chemistry data, and the implementation of a long-term monitoring program prior to construction and operation of the proposed project.

In addition, the project could negatively impact surface water flows in Mammoth Creek at a gauging station used to regulate the Water District’s surface water supply.  These impacts could occur from pressure changes in the aquifers and alteration of the natural flow patterns of geothermal fluids.  Long-time residents of the area have noted the disappearance of surface water ponds and hot springs in proximity to the existing Casa Diablo geothermal plant which started production in the 1980s.

The Water District has maintained throughout the environmental review process that critically important data were missing, that large amounts of important data were being withheld as “proprietary” thereby stifling analysis, and that the hydrogeologic modeling process was flawed.  These concerns were not adequately addressed in the process and there are no mitigation measures should the project hurt Mammoth’s water supply. With apparent pressure from the Secretary of Interior in Washington, the environmental document was pushed to rapid completion with decisions issued by both BLM and USFS within just a week after significant critical comments were submitted on the Final EIS/EIR and with no public hearings.

Without the necessary scientific data, the Final EIR/EIS for the proposed project concludes that there will not be any significant impacts to the cold water system, stating there is no connection between the two aquifers even though some of the District’s wells have water temperatures over 90 degrees and water chemistry samples collected by the USGS show that the geothermal and coldwater aquifers are connected.  Hydro-geologists reviewing the environmental documents and additional reports for the Water District have not found adequate scientific data to support the conclusion that the proposed project will not impact the community’s water supply.

The Great Basin Unified Air Pollution Control District (GBUAPCD) will be meeting to consider certification of the Final EIS/EIR under the California Environmental Quality Act (CEQA) and approval of the proposed project on September 16th at 10:30 am in Suite Z in Mammoth Lakes.  Currently, the proposed project does not include any provisions for avoiding potential impacts to the shallow cold water system through monitoring and mitigation actions.  The project cannot proceed without the GBUAPCD approval. The project proponent, ORMAT, is now being asked to work with the Water District to thoroughly address all of the Water District’s concerns and develop an acceptable monitoring and mitigation plan.

To learn more about the proposed project and the Water District’s concerns, please attend the September 3rd special meeting at 7:00 pm in the MCWD Board Conference Room.

We work to provide daily news to all of the Eastern Sierra, in the tradition of Eastern Sierra News Service and the Sierra Wave. We bring you daily happenings, local politics, crime, government dealings and fun stuff. Please contact us.
View all posts by News Staff →
Rim Fire update
Letter to the editor: Town defines “crazy”
3 Comments
Newest
Oldest Most Voted
Inline Feedbacks
View all comments

I am surprised LADWP hasn’t said anything yet.

I read right here on your wonderful news page that Mammoth had all the water they need even at build out with the recent 5 million dollar settlement and the renaming of Mammoth Creek to DWP Creek. Maybe it has to be renamed again to Up —- Creek. =

A comprehensive monitoring plan for our local aquifer seems like a good idea to me. With all the water around here, surely there is a way to mitigate this potential problem and get on with the building of the plant. Both the aquifer and the plant are important. It would… Read more »