By News Staff on April 29, 2013 in Government Agencies/Utilities

For those who might have thought the Town of Mammoth’s money problems were over, not so. When they meet Wednesday at 5pm, the Town Council will face the fact that the 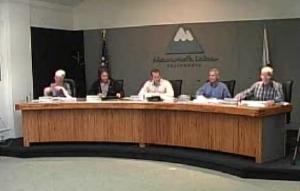 next fiscal year’s budget is short more than half a million dollars compared to the five-year financial plan. Officials point to unknowns in the five-year projections and the still unfunded Whitmore Pool.

The baseline budget for 2013-2014 shows a projected shortfall of $562,527. Town Manager Marianna Marysheva-Martinez said, “Deviations were fully expected because the five-year plan was developed using September 2012 or earlier numbers and,” she said, “projections were made at a high level.” She called the shortfall disappointing.

Martinez explained that the utility franchise fee revenue did not increase as projected. She said this is possibly due to a warmer winter than the past year and lower gas and electricity usage. She said the five-year plan also assumed a lower budget for gasoline, diesel and maintenance supplies at the Airport than were actually used this year.

Although the Town Council did agree to fund Whitmore Pool and a maintenance position for last fiscal year, the funds are still not there for next fiscal year in the five-year plan. Town Manager Martinez said she personally does not believe that the Town can stop providing the program without other alternatives so she left it funded in next year’s budget. The Whitmore cost equals $184,248.

The Town will also experience lower gas tax revenue due to another dry winter in 2012-13. Airport revenues will be lower mostly due to fewer flights.

The Town Manager will offer the Town Council several options to balance the budget. Among them – delays in hiring a Community & Economic Development Director, a Budget and Management analyst, a second TOT specialist and a new police officer. The delays have the option of six months to a full year.

The Council could also choose to delay remodeling the police station, reduce road rehab, shift 50% of the cost of fishing enhancement, Fourth of July fireworks, and the Chamber of Commerce to Mammoth Tourism.

The agenda bill says development of balancing options emphasize sustaining current programs and services and avoiding layoffs. To keep track of what is happening, staff will report quarterly on revenues and expenditures. If finances improve, the Council will have a chance to restore any delays or cuts.

I make sure I don’t spend a time within TOML.

Fund Whitmore pool or fix the joke of a Police Station. I vote fot public safety first. This one thing the Grand Jury did well and that was to point out all the flaws in the Police Facility and how it puts the Town at a great potential for liability.… Read more »

Choices, you want more public safety in one of the safes places in the state? I would rather go swimming.

Trouble, did you actually read the story? Repairing the police station has nothing to do with more public safety. Go take a tour of the station like I did. Then come back and make an educated comment.

Choices- luv your bull, I was answering your comment and meant every word of it. And if you are looking for a educated answer from a me, well, good luck with that.

I’m glad you recognize that most, if not all, of your comments are ignorant of the facts. Its the first educated comment you have ever posted.

Overall I am not in the mood to bash the blogging community. At least Trouble can keep it real. Nobody is perfect in this world of Hypocrisy!

Sooooo Trouble, how many times have you been arrested?

Put up or Shut up!

Two months ago they announced nearly a million dollar surplus. SPEND, SPEND SPEND went staff. Now we have a $562,527 shortfall. Which is it? In any real world application you have just proven that you have a gigantic problem with staff here. Quarterly reports have brought this town to the… Read more »

Curious
Reply to  Put up or Shut up!

What happened to the best summer ever ? Where is all the cash the airport generates and our return on investment ? Where is all the marketing revenue we were told each marketing dollar would generate? The budget forecast has swung 1.5 million dollars in a few weeks time. Why… Read more »

At a recent Rotary Club meeting, the town manager told the club that Mammoth needs (brace yourself) “auto dealerships, car washes … “stuff like that.” (I’m not kidding). This, and her desire to hire somebody who actually knows (or claims they know) something about economic development (for a cool quarter… Read more »