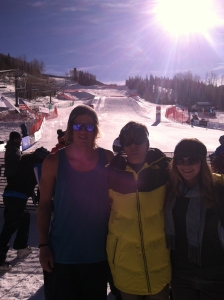 Mammoth’s newly formed SX Team was on the road the past two weeks competing
in the opening two Ski Cross World Cups of the 2013 season; Dec 7th at
Nakiska, Alberta Canada and Dec12th at Telluride, CO. Lead by John Teller,
Mammoth local and XGames Gold Medalist, the team brought back a host of
results.

Teller, who again is establishing himself as one of the best in
the world, placed 11th at Nakiska and 7th in Telluride. His exciting skiing
and strong results helps John get closer to meeting the quota and earning
an Olympic spot for Sochi, Russia 2014. Madeline Riffel and Tyler Wallasch
lead the charge for the US as our top junior finishers. Riffel,
exponentially moving her way up the ranks was the top American female at
Nakiska and at Telluride she earned her first World Cup points coming in
29th.

Wallasch was equally impressive at both events finishing second for
Americans at Nakiska and missing the finals by a half second. Because
Riffel and Wallasch were the top American juniors at Telluride, on a track
so big it was compared to the XGames, they have earned themselves spots on
the US Freeski Junior World Championship Team.

The Junior World Championships will be held at the end of March in Val Malenco, Italy. In
the mean time Riffel will travel North America competing for the North
American Cup Title while Wallasch will be joining John Teller on the World
Cup Tour. They are currently competing in Val Thorens, France and will head
to San Candido, Italy before they come back to Mammoth for Christmas.

We work to provide daily news to all of the Eastern Sierra, in the tradition of Eastern Sierra News Service and the Sierra Wave. We bring you daily happenings, local politics, crime, government dealings and fun stuff. Please contact us.
View all posts by News Staff →
Two Mammoth Police Officers respond to string of crimes
Three Mammoth Police Officers trying for Mono Sheriff jobs