This past weekend, Mammoth Lakes Police Officers took reports of two residential burglaries and one attempted burglary in the Snowcreek area. Heavy Equipment, parked behind Fire Station 2 was also vandalized and may be related. 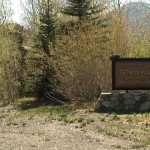 The suspect broke out glass windows to gain access to the deadbolts at the front door of the residences. No injuries were reported and the residences were not occupied during the crimes.

A possible suspect description is as follows:

White or Hispanic male adult, 20 years old +, short hair, black pants, black t-shirt, black hat and a large black backpack. The suspect has a skateboard and has been seen skateboarding on Club Dr. from Old Mammoth Road to the Snowcreek Condos.

Tuesday morning, when MLPD officers came on duty, they became aware of another break-in that occurred in the same area. Upon arrival, officers made entry and cleared the condo of any potential suspects. MLPD officers and property managers then discovered a total of 8 units that had been broken into during the night or early morning hours. A witness described seeing a possible suspect leaving the area on foot early Tuesday morning.

MLPD officers, assisted by deputies from the Mono County Sheriff’s Department and Mono County D.A. Investigators sealed a perimeter and searched the area on foot for several hours. The suspect is still at large. The numerous crime scenes are being processed for evidence.

Please be on the lookout for anything or anyone who appears suspicious. Report suspicious activity to the Mammoth Lakes Police Department or call 911.

If City Council wouldn’t have done that, these crimes would have never occurred!

I would be willing to bet that these crimes occurred during the hours when the cops go home and no one is working. Thanks city council for the lawsuit that will hurt the citizens for another two decades.