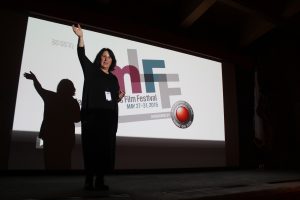 The jury will be divided among three competitive Festival categories: Narrative Feature, Documentary Feature, and Shorts. The winning films and filmmakers in each category will be announced at the MLFF Awards Ceremony and Party event on Sunday, May 29 at 9 p.m. at Sierra Event Center in Mammoth Lakes.

Early bird tickets go on sale April 18 for the All Movie passes only, which will cost $99. The All Movie pass includes 15 tickets to the screenings of your choice, and will cost $125 after April 29. The 2016 Festival runs from May 25-29 and the line up of films will be announced at the end of April.

“The goal of our festival is to provide emerging filmmakers a forum to have their work seen by industry professionals,” said Festival Director Shira Dubrovner. “Our jurors are as unique and multi-faceted as the films they will judge. We are still waiting to hear back from a few filmmakers, but the films we have confirmed are sure to exhilarate, inspire, and certainly entertain.”

Members of the jury judging the Narrative Feature category include John Fielder (producer, Serial Mom, Pecker, Cecil B. Demented), John Wirth (writer, producer, Hell On Wheels, The Cape, Terminator: The Sarah Connor Chronicles, Love Monkey, Ghost Whisperer), and Kelly Leow (Deputy Editor for MovieMaker Magazine). Members of the jury judging the Documentary Feature category include John Scheinfeld (filmmaker, The U.S. vs. John Lennon, and Who Is Harry Nilsson (And Why Is Everybody Talkin’ About Him)?), and Katherine Tulich (entertainment journalist, Los Angeles Times, Variety).

Members of the jury judging the Shorts category include Bojana Sandic (director of Short Film Programming at the Newport Beach Film Festival, the Short Film Programmer for South East European Film Festival in Los Angeles, and the editor of Music In Press, an online music magazine), and Amanda Salazar (Vice President of Film Acquisitions at Fandor).

There will also be two Audience Awards (one for Documentary Feature and one for Narrative Feature) where the winners will receive a GoPro camera. The winning filmmaker in each category will also take home a one-of-a-kind bear statuette named Orson.

The Mammoth Lakes Film Festival is a 5-day festival that will screen 50 films from May 25-29. Early bird tickets go on sale April 18 and will only be available until April 29. Regular ticket sales will begin April 30. To learn more, visit www.MammothLakesFilmFestival.com.