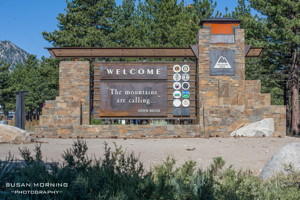 Mammoth Lakes, CA – After three years of meticulous planning, indomitable fundraising and generous contributions from the entire community, the Mammoth Gateway Project is now complete and has been awarded the 2013 “Putnam Award for Excellence” from the League of California Cities.

“The Mammoth Gateway Community Project illustrates how cooperation between local, state and federal agencies as well as business and community volunteers can help make a lasting first impression for visitors in a town where the local economy is highly dependent on tourism,” stated Elizabeth Tenney, Planning and Economic Development Commissioner.

A representative from The League of California Cities will personally present the award to the Mammoth Lakes Town Council and the project partners on Wednesday, October 16, 2013 beginning at 6:00 p.m. in Suite Z (Minaret Village Mall), 437 Old Mammoth Road.

This prestigious award was established in 1982 by the League of California Cities to recognize outstanding achievements made by cities that uniquely contribute to community residents and businesses.

The purpose of the Helen Putnam Award for Excellence is to promote the outstanding efforts and innovative solutions by city governments to:

Improve the quality of life in local communities

“The Town’s award, in the category of City-Business Relations, highlights the unique cooperation between the public and private sectors to construct an iconic symbol representative of the rugged character of the region and resilience of the community,” stated Jessica Morriss, Transportation Planner for the Town of Mammoth Lakes.

The Gateway monuments, which were completed in the Spring of 2013 after almost three years of planning, design, and construction, have become a source of pride for the community and clearly demonstrates that Mammoth Lakes is still moving forward. Designed and built to last a hundred years or more, the Gateway to Mammoth Lakes became a popular visitor photo opportunity even before it was finished.

The Gateway’s north side on US Forest Service land, with the cooperation of Jon Regelbrugge, District Ranger, Inyo National Forest, has been landscaped with native plant seed and boulders. An abstract graphic of mountain slopes in raw steel was fabricated at Mammoth Mountain Ski Area and installed on the west side of the north monument. The graphic complements the John Muir quote departure message “Going to the mountains is going home. See you again soon.” on the south monument.

Around the south monument, plant varieties in the drought-tolerant demonstration garden have been labeled for ready reference by homeowners, condo managers and landscapers. The Gateway demonstration garden was commissioned by Mammoth Community Water District and designed and installed by Bob Weiland, Weiland & Associates, Inc. Mono County Superior Court is supplying the water from the Court’s dedicated irrigation meter.

Additional information regarding this prestigious award by the League of California Cities can be viewed online at: www.cacities.org/Top/Partners/Helen-Putnam- Awards.aspx, or by contacting Jessica Morriss, Transportation Planner for the Town of Mammoth Lakes at (760) 934-8989 ext. 225.

Elizabeth Tenney raised almost $100,000 in donations single-handedly by having fundraisers. About $250,000 in materials and labor were donated. And the rest of the funding came from the towns public art fund, which is money paid by developers. Those are the facts. There was no public tax payer money spent… Read more »

I see a lot tourists taking photos of the new signs, on a daily basis during the summer. This was not the case with old entrance sign. At least this “monument” is a great counterbalance to the new courthouse we were stuck with, thanks to the State government. Remember, for… Read more »

…and while the Town was ram-rodding the Gateway signs through its approval; they were simultaneously complaining and having public meetings about Caltrans’ new changeable message sign to warn drivers about conditions on 395 during winter storms. Caltrans’ sign is a fraction of the sign of those monoliths the Town built.

Does anything EVER make any of you happy? I swear, just a bunch of complainers. Get a freaking life already.

Mongo The Idiot
Reply to  annoyed

Are you Kidding me!!!!
Reply to  annoyed

Are we ever happy? Of course. The problem is that this is about an award for getting along. The purpose of the Helen Putnam Award for Excellence is to promote the outstanding efforts and innovative solutions by city governments. So we should be happy our government overrides the will of… Read more »

Mark
Reply to  Are you Kidding me!!!!

And the award was buracracy patting buracracy on the back and giving them an atta boy. I say big deal who cares.

I’ve enjoyed going to Mammoth as a break from the Bishop heat, do a little shopping and take in some mountain air. During my last trip I noticed an extra sales tax called a “tourism assesment tax” or something ridiculous like that. That brings the total tax up to nearly… Read more »

Pinky And The Brain

Like putting a statue of the Virgin Mary outside a brothel…
Well said!
If anyone involved in the monument had actually read any of Muir’s works they never could have chosen them for this debacle.
The printed word is dead and this is just another nail in the coffin.

Invoking the image of John Muir at the entrance to the Town of Mammoth Lakes is like putting a statue of the Virgin Mary outside a brothel. Meadows turned into golf courses, the landscape littered with condos, strip malls, gas stations, motels, and associated schlock. A town devoted not to… Read more »

allen….Maybe they should have a statue of a couple guys giggling,sitting on a couch with a wee-remote in their hand in front of a television…..with a bong sitting on a coffee table nearby.

Dave McCoy’s persona would have made a lot more sense than John Muir’s.

Wayne- that sounds like great ideas to me. A cold keg for those hot nights might help.

I expect you will be the first to move out to relieve the over crowding. Until you move, you will glady do without gas stations or grocery stores in order to restore the state of nature. Of course you will. Naturally. Right?

Mary's son might not agree.
Reply to  allen berrey

“Amen, I say to you, tax collectors and prostitutes are entering the kingdom of God before you.” (Matt 21:31)

Allen Berry your comment is spot on. And I’m sure John Muir is rolling over in his grave

CALM DOWN
Reply to  allen berrey

Calm down, Allen. Mammoth Lakes wouldn’t exist without the ski area. There are plenty of places in the Sierras where you can enjoy the passive, contemplative exploratoin and experience of nature and the wildnerness. Dave McCoy built a world class ski resort and the town grew to support MMSA. Thanks… Read more »

Ken Warner
Reply to  CALM DOWN

Mammoth Lakes was here for a hundred years before the ski area. It was a mining, logging and pack station for people going over Mammoth Pass to the central valley. If Mammoth Mountain sank into the ground today, the lakes and back country would still be there. Have you been… Read more »

That’s one of the best post I’ve read here in awhile.

I read this and I like go, Am I dreaming this. Could this be real. The CA league of cities gives out an award to The town who’s Public Arts commission felt so strongly against the project that the commissioners resigned!!!! They give an award to a corrupt and arrogant… Read more »

Dingo
Reply to  Are you Kidding me!!!!

Are you Kidding me, we got thumbs down from the same three people.
I can guess where all 3 work

Pedro
Reply to  Are you Kidding me!!!!

AyKm!,
Humans are only animal that can laugh at their own pain. Your post had me doubled over laughing. I had to wait a day to read it again and it still cracks me up. You are so painfully spot on. The whole history is so surreally absurd. Thank you.

Mongo The Idiot
Reply to  Pedro

What about the Hyena?

CALM DOWN
Reply to  Are you Kidding me!!!!

You forget that much of the materials and labor were donated and private fundraisers were held to support this project. The funds used were from the Arts Commission, and could only be used for public art. The Commission wanted to build a monument elsewhere. When they considered funding the new… Read more »

Shine
Reply to  CALM DOWN

Still questionable that TOML would award quarter million dollars while in debt negotiations and considering bankruptcy as option. Court may have held that those funds be used to satisfy debt. If, in anticipation of bankruptcy, this was an attempt in keeping funds from being seized by Court, it was shady… Read more »

Pedro
Reply to  CALM DOWN

Because art is in the eye of the individual. Since I consider pole dancing an art should the Commission approve funding a strip club? The Commission decides for the community as a whole and has to answer to them. Maybe painting murals on the courthouse or one of the many… Read more »

Ken Warner
Reply to  CALM DOWN

I also think “Fish on Sticks” are cheap and tacky. But I also don’t think the “monument” is art. The money used for it could keep Whitmore Pool open for 3 years. That would be a better use of the money. There was a perfectly nice entrance marker in just… Read more »

mk
Reply to  CALM DOWN

Calm down, You act like we did not know the public art funds were restricted. However as others have stated the town nor anyone else knew what moves a BK judge would make to have the debt paid. This is probably why the town settled instead of having a BK… Read more »

Those beautiful monuments “make a lasting first impression” of about five minutes until you see how blighted Mammoth is.

John Muir and the Sierra Nevada Mountains are what won that award, don’t kid.