By News Staff on December 6, 2011 in Government Agencies/Utilities 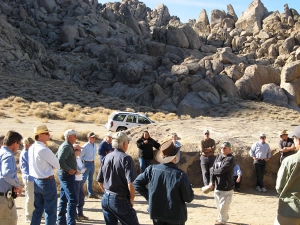 Bright lights and cameras have descended on Independence and other locations this week with a major film company at work on a new movie.  Inyo Film Commissioner Chris Langley reported to the Inyo Board of Supervisors on current and recent film activity. Though Langley said he could not disclose details about the current movie, The Internet Movie Database says the film is “Django Unchained” starring Leonardo DiCaprio, Jamie Foxx, Kurt Russell, Samuel L. Jackson, Don Johnson, Kerry Washington and many others.  Quentin Tarantino wrote and will direct the movie.

Langley said there is a non-disclosure agreement that he must honor, so he would not say exactly what the movie is and who is in it. Langley did tell the Supervisors that the bright lights in Independence at night will continue through the week.  He also said there are two Oscar winners here.  Langley said that Leonardo DiCaprio stars in the film but does not appear in the part under production here.

Langley said once work has ended in Independence, the crew will move on to some shoots in Mammoth Lakes and then back to Inyo.  Langley added that the movie is “quite violent.”  He also said that the production has meant a real economic plus for Southern Inyo.

Kathleen New, Director of the Lone Pine Chamber of Commerce, agreed and said that Chris Langley “does by accident more for Inyo County than others do intentionally.  He works harder to make movie people feel that they fit in here and want to come back.  He has a real talent,” said New.

Langley reported to the Supervisors three other production shoots in recent months – a Dodge Ram commercial shot in the Alabama Hills, a New York film maker who shot scenes at Laws Railroad Museum and on Sherwin Grade, and a General Dynamics weapon shoot in Southern Inyo that doubled as Afghanistan.

Langley said more movie making lies ahead in the new year.  And, if you want a possible siting of the stars now in town, check out the Lone Pine Chamber Christmas Mixer Thursday at 5pm at the Dow Villa Hotel.

This is old news. The Sheet and Mammoth Times ran this weeks ago.

Actually it was news today when Chris Langley spoke to the Inyo Supervisors and reported on actual filming right now.
The other comments are what citizens are talking about in Southern Inyo. Langley also reported on other filming he has assisted in Inyo. News critique noted.
Benett Kessler

Umm…it’s called “Django Unchained,” and will be shooting extensively in and around Mammoth Lakes/Mammoth Mountain in mid-December. This has been rather well covered for several weeks now…I thought by you among others?? But I guess not.