By Deb Murphy on May 9, 2022 in Bureau of Land Management (BLM), Fire, Inyo National forest 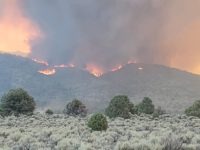 The report on forest conditions should have come as no surprise to the Eastern Sierra. Moisture levels in the national forests are very low and dropping with wildland fires predicted to hit
earlier in the season. The prospect of future forest closures is a possibility.

As if to punctuate the situation, Inyo National Forest Supervisor Lesley Yen gave her report to Inyo and Mono Supervisors remotely from the fire burning through New Mexico. Yen’s advice to those holding business permits: get your paperwork requesting exemptions to the closures done as soon as possible.

Staffers from the Bureau of Land Management and the Interagency Fire Management Office
provided the grim statistics: December delivered the least substantial rainfall ever in California;
the state’s snowpack is at 38-percent of normal with the Sierra Nevada at 4-percent; the water
content in vegetation is at 30-percent and dropping one to two months earlier than normal
while temperatures are climbing. The significance of fuel moisture is critical. The lower that
number the quicker a fire will burn.

The one small bit of better news: statistics on fire potential are better at higher elevations.

With fire conditions at a frightening high, Lance Rosen, assistant fire management officer with
Bishop’s BLM office, had even worse news: staffing is at 70- to 75-percent of normal. “With a
long, busy, smoky summer ahead of us, we should be fully prepared and staffed. That is not the
case,” he told the Supervisors.

In past years, Rosen said, nine engines are fully staffed seven days a week throughout the fire
season. This year, seven of those nine are staffed only five days a week. The high cost of living
and lack of affordable housing in the Eastern Sierra were cited as issues contributing to the
staffing shortages.

Yen outlined the Forest Service’s closure process, starting with Stage 1 ban on camp fires for
dispersed camping. Stage 2 would ban fires anywhere in the forest followed by full forest
closures. “I wish closures were a local decision,” Yen said, “but we have to look at the broader
context, at regional and national staffing.”

There are efforts to change, Yen said, with a shift toward more Hot Shot units, greater wage
parity and more fuel treatment, but “the shift is slower than we’d like.” In addition, the INF is
working on the mechanism for day use in the forest, modeled after the Toiyabe National Forest.

So there’s talk of allowing non-profits to sell safe & sane fireworks? wow that would be a really bad idea. That opens the window for illegal fireworks sales, and it’s all down hill from there. If you want to buy fireworks I suggest moving to Palmdale.

But still,soon the money-making venture allowed to sell and set off fireworks in Inyo County.
An accident ( wildfire ) waiting to happen…

definitely would like USFS to recognize that most locals don’t have yards and need the forest for dog walking and recreation. A day time use only exception for locals for low risk activities is needed and reasonable.

“Exception for locals” So local illegals could access the national forest but U.S. Citizens from Ridgecrest could not? hmm, that’s wrong on many levels. Plus your suggestion sounds like a management nightmare and the USFS by closing the forest would be equivalent to failure to manage in the first place.

Closing access to our public lands is unacceptable. I have used the wilderness/national forests for my entire life and never started a wildfire. The logic used by government agencies in attempt justify denying people access to public lands is ludicrous. Punishing the vast majority of responsible people because of the… Read more »

Let’s see….. closures are cheaper than hiring more staff, could that be it? Nah, it’s those careless local day hikers walking their dogs that are starting fires all over the place and families just trying to get away from it all. But hey, we’re tough here in Bishop, we can… Read more »

No small businesses, while they were slowly dying off everyone ordering from Amazon finished them off. I regularly disperse came and have never had a fire. I go to bed when the sun sets and out of bed when it rises. What really pisses me off his people dumping the… Read more »

Enough is enough. Dispersed campers in the eastern Sierra have proven themselves too irresponsible to have the privilege of campfires. This type of recreation has jeopardized our towns far too many times to count since the pandemic occurred. Fires must be banned in order to protect nondangerous forms of recreation… Read more »

While I agree fires should not be allowed while disperse camping I urge you to take some responsibility and have defensible space around your home.

Yen says she wishes the closures could be a local decision but…no? REALLY? ? The county supervisors and towns people should be involved in these closure decisions as we can’t afford to be closed anymore. Is Yen going to supplement our businesses and county coffers to pay for all the… Read more »

“Emergency Forest Closures” in two short years morphed into another tool in the tool box without public comment. Blanked restrictions throughout an entire forest should be limited to truly extraordinary emergencies. Build a graduated plan to maintain public safety and quit with the easy way out simply closing the forest.

Toiyabe National forest hasn’t been shut down the last two years. If so, only for a short time. Historically that forest has more major fires than the Inyo. Since they are both federally run, shouldn’t they both be governed the same? It shouldn’t matter that the Inyo’s main offices are… Read more »

what can the Supes do to work with USFS to develop a strategy to mitigate economic impacts to private businesses on the Forest? Thinking resorts, pack stations, guides….?

Ya’ll have put on notice to make defensible space or else. Yikes

What evidence exists that once campfires are banned, trail closures add further protection?

Couldn’t agree more. The obvious fire hazards in Inyo Nat. Forest or obvious. Dense to moderately dense forests at middle elevation (6000-8000 ft) are particular places to be concerned about, especially where there are lots of beetle-killed dead tree standing. The Mammoth Scenic Loop is a good (actually bad) example.… Read more »

I have a hard time accepting that “closures” are effective when the highway and the internet are open. At full employment, BLM does not have enough payroll dedicated to the Alabama Hills. Their response to huge increase of visitors has been to close the majority of the camp sites to… Read more »

Closing access is how the Forest F Dummies deal with their challenges. Closures are proof of their failure to manage. I despise the agency with a passion.

Fewer people out there reduce the chances of a human caused fire?
Just a guess.

Deborah A Murphy
Reply to  Tinner

Here’s an abbreviated version of the last 10 years or more, based on my coverage when I worked for the Inyo Register. The Forest Service would put out fires very quickly which created a lot more burnable fuel. The Native Americans realized fires kept the forests healthy by taking out… Read more »

Where can I find a recording of this update? Zoom or YouTube link?

Deborah A Murphy
Reply to  Concerned

Oops–lost my place. Here’s the web address that should get you to the video. Go down the agenda to the 11 a.m. timed item. USFS/BLM. If you hit item 14, you should be able to get straight to the presentation. Lot of technical stuff from some of the presenters but… Read more »