INDEPENDENCE, CA –The newest exhibit at the Eastern California Museum features one of the oldest artifacts to ever be put on display at the museum. Visitors will now be able to see a nearly complete mammoth or mastodon tusk dating from the last Ice Age, which would make it at least 10,000 years old, if not thousands of years older. 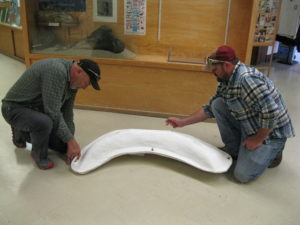 The tusk was discovered on Los Angeles Department of Water and Power lands near Owens Lake in February 2015. Soon after the discovery, the LADWP contracted with ESA – Environmental Science Associates, to stabilize the fragile artifact. ESA paleontologist Dr. Michael Williams excavated the fragmented tusk and safely transported it to the Natural History Museum of Los Angeles (NHMLA). Dr. Nathan Smith and Jose Soler of the NHMLA’s Dinosaur Institute then carefully stabilized the specimen and utilized the latest materials and techniques to preserve the tusk.

After the highly specialized work on the specimen was completed, LADWP offered to loan the tusk to the Eastern California Museum, where it is now on display along with other local fossil specimens from the Museum’s collection.

“LADWP ensured the safe transport and curation of the specimen and at an institution where first-class restoration and preservation professionals could work on it so it could be displayed,” said Eastern California Museum Director Jon Klusmire. “We are grateful that LADWP devoted the time and resources to care for and preserve this priceless part of Owens Valley history and then allowed the Eastern California Museum to display it so the public could also learn from and enjoy this extraordinary artifact.” 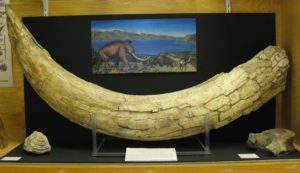 The proboscidean tusk, on loan from the Los Angeles Department of Water and Power, and artwork by Laura Cunningham illustrating what a Pleistocene scene might have looked like at Owens Lake during the Ice Age. Photo courtesy Eastern California Museum

“We are happy with the outcome of this tusk finding, said Anselmo Collins, LADWP Director of Water Operations. “The correct management of cultural and paleontological resources is critical in promoting better communication and relationships in the Owens Valley. LADWP was excited to collaborate for the public presentation of this tusk, and help preserve some history of the area.  Our staff learned a lot from our partners at the Eastern California Museum and we want to continue being resources for one another and develop more opportunities to highlight the uniqueness of the Eastern Sierra,” said Collins.

Determining the exact age of the tusk and which species it came from has been a challenge, as is the case with most fossils. The tusk is a Proboscidean tusk from the Pleistocene Epoch, which spanned approximately 10,000 to 2.5 million years ago. The specimen could be from either a mammoth (Mammuthus) or mastodon (Mammut). 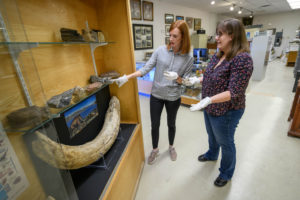 “The taxonomic determination of the proboscidean tusk is unknown at this time,” Michael J. Williams, Ph.D., Principal Paleontologist, ESA, explained in his report. “Given the preponderance of Mammuthus versus Mammut specimens found in the Owens Valley, the tusk may be more likely associated with Mammuthus,” he surmised.

Mastodons roamed North America for at least 5 million years, while mammoths arrived during the early Pleistocene, approximately 1.8 million years ago. In general the climate of California was cooler and wetter during the Pleistocene compared to today. Mammoths and mastodons were part of a group of large, Ice Age mammals termed the megafauna (any animal over 100 pounds).

During the Pleistocene, megafauna included such animals as giant ground sloths, bears, bison, saber tooth cats and camels. Much of the Pleistocene megafauna, including mammoths and mastodons, went extinct by the end of the Pleistocene Epoch due to changing climate, overhunting by humans, and/or other environmental stresses, the report explained.

Williams, ESA cultural resource specialists Matthew Gonzalez, B.A., and Michael Vader, B.A., recovered the fragmented tusk and surveyed the location where it was discovered, but no additional fossilized remains were found.

In addition to the tusk, LADWP also received approval from artist Laura Cunningham to use a reproduction of her color painting imagining what the Owens Lake region might have looked like in the Pleistocene Epoch. The artwork depicts an Ice Age mammoth, camel and bison grazing on the shores of the Owens Lake. The artwork is also part of the Eastern California Museum’s tusk exhibit.

The tusk is displayed in the museum’s Fossil Case with other specimens from mastodons and mammoths that were also found in Inyo County. Those include a mastodon jawbone, a mastodon vertebrae, two pieces of a mammoth femur, and a mammoth tooth. Other fossils in the case include trilobites, ammonites, petrified wood, petrified snails and worm burrows.

Williams added an interesting historical note about Owens Valley fossil discoveries in the early 20th century: A specimen of Columbian mammoth (Mammuthus columbi) was collected by William Mullholland during construction of the Los Angeles Aqueduct (1908-1913). Mulholland conceived of and oversaw completion of the LA Aqueduct and served as chief engineer and general manager of the city-owned Bureau of Water Works and Supply, the precursor to the LADWP. The specimen he collected is housed at the Natural History Museum of Los Angeles.

“We appreciate the work done by everyone who assisted in preserving this remarkable megafauna specimen,” Klusmire said. That group includes Joseph Ramallo, LADWP Assistant General Manager of Communications, who was instrumental in the coordination and planning with NHM and the ECM; Ray Ramirez, LADWP Environmental Specialist, Owens Lake, who coordinated the work on the ground; and Jessica Johnson, LADWP Public Relations Specialist; ESA staff Monica Strauss; Dr. Michael William; Matt Gonzalez; and Mike Vader; and Dr. Nathan Smith and Jose Soler of the Dinosaur Institute at the Natural History Museum of Los Angeles.