KSRW, the Sierra Wave welcomes the Insane Darrell Wayne’s to our radio family, with his show The Latest from The Greatest.

Darrell was first bitten by the radio bug at the tender age old of 15. Darrell kicked off his long and illustrious radio career at KEZY in Anaheim, where he managed equipment and phone lines. In 1972,  opportunity knocked and Darrell began broadcasting.  Darrell’s quick wit, great musical taste, and deep knowledge of music made him a near instant success. 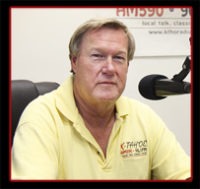 In the years since, Darrell has worn many hats from engineering work to program development to operation management to a 5-year stint as an on-air personality at World Famous KROQ in Southern California—where he became known as The Insane Darrell Wayne.  Darrell still has his finger on the pulse of the airwaves.

While vacationing in Lake Tahoe, California, the staff at K-Tahoe approached Darrell with an opportunity that he felt he couldn’t refuse and Darrell Wayne purchased KTHO. Today, The Insane Darrell Wayne stays busy with his syndicated show, The Latest from the Greatest. The Latest from The Greatest features artist interviews, a weekly countdown, and new music.  Darrell takes us on a musical safari hunting the whereabouts of our favorite musicians from the past and letting us hear what they are doing now.

Be sure to hear Darrell’s show every Friday night after 8:00, following Sierra Wave Presents on Alt 92.5 the Sierra Wave, streaming on www.sierrawave.net, or just ask Siri or Alexa to play KSRW.

I’ve listened to this gentleman on more than one occasion, and I can attest, his show is nutty, possibly cuckoo, but definitely not insane.