By News Staff on October 19, 2013 in General Misc. Stories, Obituaries

Kathy Henderson, beloved wife, mother, friend and civic leader, passed away at Renown Medical Center in Reno on Oct. 13, 2013 surrounded by family. Kathy was a born-again Christian who loved her family and Savior, Jesus Christ. 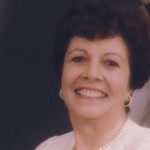 Born Sept. 27, 1933 in Kingman, Ariz. to Leslie and Amy Roe, Kathy was raised in several small mining towns in northern Arizona with her older brother Chuck, sister Ruby and younger brother John. She graduated from Mojave County High School with her brother Chuck in 1950 where she was the class darling. She attended Arizona State University and received a degree and teaching credential in elementary education in 1954. Upon graduation she accepted her first position teaching fifth grade at Chandler Junior High School near Phoenix.

Kathy’s mother, Amy Shelton, grew-up on a desert ranch in Arizona neighboring the Willows Ranch owned by the Imus family and Amy developed a close friendship with the eldest daughter Ina. Both family ranches were lost during the Depression but Amy and Ina kept in touch as they married and raised their families. Through this life-long friendship Kathy met her sole-mate Elvie Henderson, Ina’s son, who was raised in Bishop. Elvie and Kathy were married on June 9, 1956 in Phoenix and initially settled in southern California where Elvie was employed in the aerospace industry, while Kathy continued to teach. Her teaching career ended with the arrival of her children, including Don and Hugh in rapid succession, and a later surprise of daughter, Pamela.

During the early years of raising a family, Kathy became active in the community, starting first in the Church and progressing into community relief programs and serving on the County Grand Jury. In 1967, the Simi Valley Chamber of Commerce honored her as their Woman of the Year for her leadership in providing family relief during an extensive and damaging fire storm.

With a desire to raise a growing family in a small town and to be closer to family, Elvie and Kathy began to look for ways to settle in Bishop. Their hope was soon realized with the purchase of Coach and Camper Service in 1971, beginning a 30-year family business with Elvie and Kathy working side by side.

Also with the move to Bishop, Elvie and Kathy’s faith grew and strengthened, first by joining the Bishop Methodist Church and then Church on the Mountain at Crowley Lake. Through this fellowship they made many close and lasting friendships. Their testament to the congregation was their growing faith and the example they set of a loving and supportive marriage.

However, it did not take long for Kathy to start longing for a return to the community service she loved. This return began slowly with a few selected organizations like the BUHS Booster Club and progressed to more involved passions like the Bishop Chamber of Commerce and County Grand Jury. In 1995, Kathy was appointed to fill a vacant position on the Bishop City Council that lead to a continuing commitment extending more than 12 years, including three elected terms and three years as mayor. Kathy thrived and enjoyed this phase in her life by immersing herself in City business, improvement and development and collaboration with numerous community organizations.

While commitments of family, church, work and community service lead to a busy life, the Hendersons also found time for family gatherings, class reunions and occasional travel, including trips to Israel, Ecuador, Washington, DC and Hawaii. On their 50th Anniversary Elvie and Kathy hosted their children and families, and Elvie’s sisters, Cleo and Mary Lou, to a sight-seeing tour of Alaska and the Canadian Yukon by cruise ship, train, boat and bus. What a grand and memorable adventure!

With a warm smile and welcoming heart, no one was a stranger to Kathy.

Her passing leaves a large void in our lives, but we are comforted by her memory and knowing she is now at rest in the presence of her Savior.

A memorial service will be held 2 p.m. Sunday, Oct. 20 at the Bishop Fairgrounds, Tallman Pavilion. Pastor Kelly Larson of the Bishop Creek Community Church will officiate. There will be a brief graveside internment at 10 a.m. Tuesday, Oct. 22 at at the East Line Street Cemetery.

In lieu of flowers, the family suggests donations made in Kathy’s name to the Laws Museum at P.O. Box 363 Bishop, CA 93515.