By News Staff on July 14, 2015 in Government Agencies/Utilities

A State Department-sponsored tour brought a delegation of twelve scientists to the US from Iran to consult with their counterparts on issues related to water shortages in the southwest US. 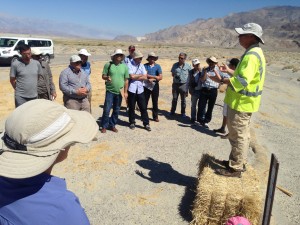 Dr. Jack Gillies from the Desert Research Institute describes how dust from the Keeler Dunes is controlled using straw bales to reduce the wind until planted native shrubs reach maturity.

Researchers from Iranian universities with backgrounds in civil engineering, hydrology, geochemistry and environmental sciences were hosted by staff from the Great Basin Unified Air Pollution Control District and LA Department of Water and Power for a tour and workshop at Owens Lake.

Water that once flowed to Lake Urmia in Iran has been diverted to support agriculture and urban populations that have a water demand larger than can be sustained by the available resources. This has caused the drying up of Lake Urmia, a terminal lake with no outlet that once covered 2,000 square miles. It now contains only about 5% of its former volume. Like Owens Lake, the lake bed is exposed to wind erosion causing enormous dust storms. 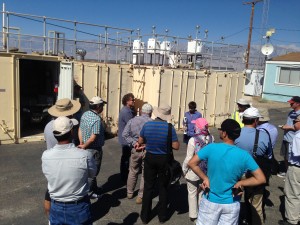 Lake Urmia dust storms have caused extremely high air pollution levels affecting the health of over 12 million people. The Iranian scientists were highly impressed with the air district’s automated air monitoring instruments and modeling system at Owens Lake, which has been acknowledged by researchers as the most advanced system used anywhere in the world.

Scientist Fred Djahanguiri said, “The number of people affected in the immediate vicinity at Lake Urmia is about 12 million, and the salt dust dispersion radius of 500 KM will affect the health, safety and environment of 65 million people on a long term basis. The population impacted are not only indigenous Azerbaijani people in West Iran, but other people affected are in the neighboring countries of Iraq, Turkey, Armenia, and the Republic of Azerbaijan.”

To help them understand the water shortage problems in the US, the Iranian delegation also met with experts at the Salton Sea, Mono Lake and the Great Salt Lake in Utah. Most of them were making their first trip to the US. While in the Eastern Sierra they stayed three nights in Bishop for the tour that took place in late June.

Those who don’t remember the past are condemned to repeat it. Except this time, they’ll have a nuclear bomb. Anyone who doesn’t think that Iran is a THREAT has either got his head buried in the sand or believes every word out that comes out of the mouth of our… Read more »

Pedro, I think Iran is more about oil and phony religious nut balls!

That’s why we have such a love/hate relationship. They’re a lot like us.

Sugar, I’m just old enough 🙂 to remember what Iran did to us in 1980. It makes me sick to see one of the hostage takers now one of Iran’s leading politicians. I agree Iraq was major mistake , but for us to turn a blind eye to Iran would… Read more »

If we are lucky, Iran will re-establish the Persian Empire and take most of the MidEast for themselves. The place is a mess and we should pay them to take it away….

Trouble, you mean like we let the contras funnel cocaine into the U.S. so they could buy guns and the money from the guns and drugs could also be used to send arms to our friends in Iran. You gotta wonder what covert operations are being funded by the current… Read more »

If they ever get weapons grade plutonium, they’d like to make our entire country look like Owens Lake, And they just got one step closer today.

No they don’t and they won’t ever do what Netanyahu keeps screaming hysterically about. That’s just dumb.

yes Rick, too bad the country I love destabilized the entire region by invading Iraq. The balance of power between Iraq and Iran is a big part of what kept Iran at bay. Of course, looking at the big picture, who the heck are we to say who and who… Read more »