By News Staff on April 27, 2016 in General Misc. Stories, Government Agencies/Utilities, Public Event
By Deb Murphy
The Inyo County Board of Supervisors started the water conversation focused on this run-off year plan from the Los Angeles Department of Water and Power, but ended up in the larger issue of raising the water table in the valley to reduce the still nagging decline in healthy, diverse vegetation. 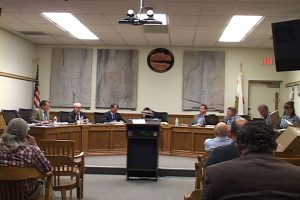 The Supervisors and Water Director Bob Harrington agreed on a series of comments to the department’s operations plan and on the fact resource planning has to be more long-term than one isolated run-off year.
Water Commission Chair Mike Prather presented the organization’s list of comments, all of which were well received by the Supervisors and will be included in the Water Department’s comments due this Friday.
– Cuts to irrigation, if any, should be matched by cuts to pumping, where appropriate
– The Five Bridges’ wells shouldn’t be turned off until the area mitigation project has reached goal.
– Water saved on the Owens Lake dust mitigation stays in the valley.
– Reduce pumping where appropriate to help the recovery of depleted aquifers.
Owens Valley tribes will petition the department for their full surface water allotments.
None of these issues are new.
In response to Supervisor Dan Totheroh’s question on pumped irrigation and mitigation water, Harrington indicated irrigation tailwater and hatchery water do make their way to the LA Aqueduct.
Prather guided the supervisors toward the concept of water banking and Supervisor Matt Kingsley ran with it.
One obvious advantage for water banking and raising the water table is the restoration of meadow grasses, dependent on high water tables. As Sally Manning pointed out at Monday’s Water Commission meeting, the currently green areas in the valley are precipitation dependent and will be gone shortly, leaving the landscape brush-filled or barren.
Water banking got mixed reviews. Supervisor Rick Pucci wanted to fix mitigation projects before LADWP started withdrawing banked water for export. Chairman Jeff Griffiths felt the valley needed something to bank.
Kingsley was in agreement on the amount of water put to in-valley uses as long as LADWP would keep the water saved on Owens Lake in the pie chart and in the valley.
He also agreed with the pumping numbers, at 75,000 acre-feet approximately 5,000 a-f more than last year’s numbers. Griffiths added the caveat that no water should be pumped for export in well fields with declining water tables.
“This process really needs long-term planning,” Harrington said. But the process is limited to the required 10-day comment period. “The timing is nuts,” said Pucci.
The next step in this on-going saga will be the Technical Group meeting, scheduled for May 6 when LADWP will respond to the County’s concerns.
Then onto the Standing Committee May 12 in Independence.

All of the recommendations and points made by the Supervisors are right on and should be addressed in the approval of the Owens Valley Operations plan for runoff year 2016-2017. My money is that LA will do just what they want with the water whether surface or pumped and Inyo… Read more »

Just to clarify, Wells 385 and 386 are permanently off according to the 1999 Mitigation plan agreed to by both Inyo County and DWP. The Water Commissioners and the Board of Supervisors both agreed that those wells need to stay off and not be pumped at all. In DWP’s Draft… Read more »

A lesson on how well governemnt works, actually seeing it in person was a great experience at this BoS discussion . First there was the presentation of the DWP Operation Plan by Bob Harrington, Director of the Inyo County . Then Mike Prather the chairperson of the Water Commission made… Read more »