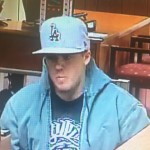 Mr. Ward has been held in the Mono County Jail since his arrest and appeared again in court on September 24, 2013.  During that court appearance, Mr. Ward plead guilty to Second Degree Robbery, as a strike offense and was sentenced to 3 years in the California Department of Corrections. Mr. Ward is still being held at the Mono County Jail pending his transportation to the state authorities.

District Attorney Tim Kendall said, “The police did an outstanding job.  The response and actions by the Mammoth Lakes Police Department resulted in the quick apprehension and capture of Mr. Ward.  Police officers were able to piece together very quickly, with the help of the community, Mr. Ward’s identity and location at the Motel 6 in Mammoth Lakes.  Once contacted, Mr. Ward, through the patience and professionalism of Sergeant Moscowitz, was calmly talked into surrendering to police and he was taken into custody without incident.”

Located with the Defendant was the stolen cash which he attempted to flush down the toilet, a carbon copy of the robbery note and the imitation gun he used in the crime, which was located in the air conditioner vent.

“In cases like this, even when you think you know the identity of the perpetrator, once they are able to flee the area and have time to dispose of evidence, the case against them becomes much more difficult to prosecute once they are apprehended.  Because of the police department’s investigation, Mr. Ward realized that there was little he could contest in court and quickly entered his plea of guilty.”

I also want to personally thank the community for getting involved.  Because of their involvement, critical assistance was given to police and helped lead to Mr. Ward’s capture.

We work to provide daily news to all of the Eastern Sierra, in the tradition of Eastern Sierra News Service and the Sierra Wave. We bring you daily happenings, local politics, crime, government dealings and fun stuff. Please contact us.
View all posts by News Staff →
Boyd resigns and Mammoth Hospital Board appoints Myers as CEO
Local help on Affordable Health Care Act and federal view
4 Comments
Newest
Oldest Most Voted
Inline Feedbacks
View all comments

A third grader with attention disorder could have caught that bone head. This guy must have wanted to get caught.

You can say that again Trouble.

What a bunch of Barnie’s.

So…did they ever identify a suspect (a valid one) in the FIRST bank robbery ?

Not so far.
BK