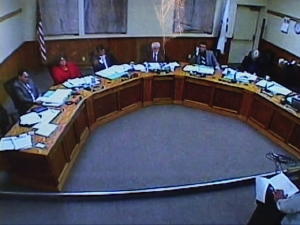 More complex than a wedding invitation – Inyo County’s discussion over whether or not and how to send a letter to the Department of Water and Power to invite officials to come to a Board meeting to update Inyo on LA’s solar project plans.

After a lengthy conversation with public comments, the Board did vote unanimously to send a letter of invitation for LA to attend a workshop in the next six weeks during a Board meeting. They will send copies of the letter to Mayor Eric Garcetti, the LA City Council and maybe the Water and Power Commission.

Supervisor Chairman Rick Pucci pushed the idea of the DWP invitation. He said he feels the public and the Board should hear from LA on their solar plans. He did repeat that DWP is not mandated to attend a Board meeting. He and other board members tiptoed around details so they wouldn’t turn DWP off to the invite.

The Owens Valley Committee attorney Don Mooney had sent a letter to the Board. Mooney wanted the Board to ask DWP if their solar project south of Independence is even in the line to use the big power transmission line that goes south. If not, DWP’s project might not be possible. Mooney said the Committee has asked LA to update them on this but has not received an answer.

Earl Wilson of Lone Pine wanted to make sure the meeting with DWP would be open to the public. Dave Wagner of Independence wanted to know how DWP is responding to comments on their Draft EIR. Paul Fretheim pointed to a UCLA study that says Los Angeles could generate plenty of power with rooftop solar panels.

Board members said they would rather get DWP to Inyo and then ask some questions rather than bringing it all up in a letter. In the end, the Board said if DWP accepts the invitation, they will send a list of questions. Supervisor Jeff Griffiths said it is his hope that DWP will come here and answer to many questions.

Supervisor Linda Arcularius pointed out that this could be the first of more meetings with DWP. She said, “This is the first step in more public discussions.”