By News Staff on June 30, 2017 in Government Agencies/Utilities

While County road crews and emergency responders join the multi-agency effort to stem the tides of this year’s historic Eastern Sierra runoff, the Inyo County Board of Supervisors took steps this week to shore up the County’s ongoing emergency proclamation, which will help ensure continued support from the State level as the runoff begins in full, frightening force. 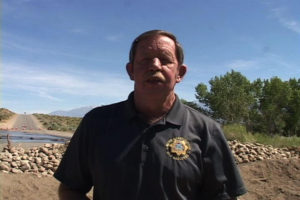 The Board of Supervisors on Tuesday, June 27 adopted an amended version of the March 28 proclamation to reflect the fact that threats of flooding and widespread damage to roads and other infrastructure have now become realities, with the County, Los Angeles Department of Water and Power and multiple allied agencies and local Native American Tribes moving from the pre-planning and preparedness stage to active response.

The Supervisors, with gratitude to all crews working around the clock, acknowledged that the “Here It Comes” Emergency has very much arrived, and wasted no time in adopting the amended resolution to initiate a process that will now help provide ongoing financial and administrative support for on-the-ground response and mitigation efforts, the latter of which may take years to complete. This aid, because of Inyo County’s proclamation, is extended to allied agencies through the Inyo County Office of Emergency Services.

The County’s OES also facilitates the use of State resources, such as CalFire crews, which it had the opportunity to do just last week when flood waters threatened to inundate Cardinal Village Resort in Bishop Creek Canyon. Sheriff Bill Lutze told the Board of Supervisors that CalFire crews worked for a day and a half to hold back the water by placing approximately 10,000 sand bags. Cardinal Village is not out of the woods yet, he said, but “those inmate crews virtually saved Cardinal Village. If it hadn’t been for them we’d have lost it.”

The County purchased another 20,000 sand bags this week to augment the 20,000 purchased in preparation for the spring runoff. These bags are given away through local fire departments.

Sheriff Lutze and the Board of Supervisors characterized the overall effort at Cardinal Village as a great example of the teamwork being seen throughout the county in response to emergency events. “The Road Department was on top of it – they hauled sand up there by the truck loads, and Ray Seguine with Bishop Fire supplied all the sand bags running up and down the roads, so it was really a good effort on everybody’s part,” Lutze said. “It was quite a feat.”

As noted in the amended resolution, since May 16, 2017, with LADWP’s activation of the Bishop Creek bypass, run-off conditions have now closed eight County roads, destroyed the Pine Creek Bridge, caused the relocation of vault toilets and impacted camp sites at the Pleasant Valley Campground, and begun to undermine the Bishop Creek bypass structure essential for diverting flood waters around the City of Bishop.

In the past week, there was also flooding at Aberdeen Resort and flooding and the temporary evacuation of Goodale Creek Campground; the loss of a culvert in the northbound lane of U.S. Highway 395 south of Independence; the need to cut a 20-foot-long, six-foot-deep trench along the western end of Dixon Lane to prevent waters from breaking over a dyke a mere half-mile from residential areas; and the displacement of rocks helping to retain the Bishop Creek Bypass, which required the immediate response of LADWP crews to prevent a catastrophic flood. The week before saw the complete loss of the bridge on North Round Valley Road at the Pine Creek crossing will cost an estimated $1.5 million to $2 million to repair. County Road Crews are working to save Round Valley’s Lower Rock Creek Bridge.

Up in the higher elevations, Southern California Edison reported Monday morning that reservoirs are close to spilling, according to County Administrative Officer/Emergency Services Director Kevin Carunchio, although SCE hopes to utilize controlled releases to avoid that scenario.

“Once the reservoirs spill, we will have even less ability to control the flows down Bishop Creek,” Carunchio said.

The Owens River south of Big Pine Creek was running at 1,155 cubic feet per second Tuesday morning; its capacity is an estimated 900 cubic feet per second. The public is again reminded that the fast-moving current and debris make the river extremely dangerous and swimming and floating the channel should be avoided.

The current inundation period is expected to persist throughout the county given the amount of snow still remaining in the mountains. The community is counting on the level of multi-agency cooperation to continue as well.

“During an emergency, there’s no finer moment in our county in terms of people and particularly agencies pulling together,” he said. “We’ve been in a pre-planning phase since March. The ‘Here it Comes’ Emergency is ‘Here It Is’ right now, and agency siloes are breaking down. DWP received kudos from Caltrans for identifying and responding so quickly to assist Caltrans in the repairs on U.S. 395. DWP’s response on Friday to pull all kinds of crews and resources to take care of the Diversion Structure on Bishop Creek shows the Department is taking this very seriously and everyone’s just pulling together.”

Carunchio also offered a strong word of caution for the public. “While things are looking good right now, nobody’s out of the woods,” he said. “Any resident or business owner should recognize that the system is at or above capacity right now and they need to take immediate action if they haven’t the last three months to protect their lives and property.”

To report flooding, please contact the Sheriff’s Office at (760) 878-0383. Be prepared to tell the Sheriff’s Dispatcher the exact location of the flooding and if the water threatens structures, animals, land, or roadways. If water threatens human life – dial 911. And always remember: If you see water crossing a roadway – Turn Around, Don’t Drown!

For more information on flooding risks and preparedness, check out the following link: http://www.ready.gov/floods.

I warned people in my Op Ed in the Inyo Register 2 months ago about this potential runoff disaster having been through the 1969 run off diaster. That year we also had tremendous thunderstorms adding to the flooding problems. I hope that the Bishop Creek Bypass Diversion Structure holds or… Read more »