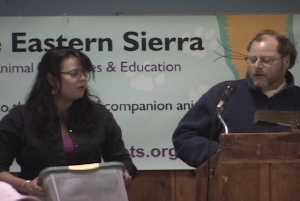 The Eastern Sierra does love its animals. The annual ICARE fundraiser dinner at the Tri County Fairgrounds drew some 700 people on Saturday. Tickets, auctions and raffles brought in $30,000 to Inyo County Animal Resources & Education.

Whiskey Creek catered the dinner, sponsored by Union Bank, the Sierra Wave and LADWP. 4-H and AVID members served dinner. A lively auction of donated items quickly unfolded with KSRW’s Bob Todd and Catherine Hurdle at the helm. Raffle tickets for a dog-theme quilt donated by Quilters in Stitches brought in $1500. A bookcase built by ICARE president Ted Schade netted $1175 in the auction. Stan Smith and his energetic crew raised $4,366 for the 50/50 drawing. Bob Waggoner won and donated back half of his winnings – more than $1,000. 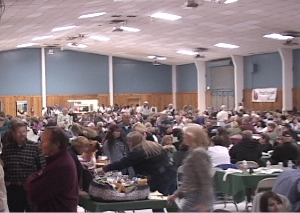 We work to provide daily news to all of the Eastern Sierra, in the tradition of Eastern Sierra News Service and the Sierra Wave. We bring you daily happenings, local politics, crime, government dealings and fun stuff. Please contact us.
View all posts by News Staff →
Jobs of federal employees saved by last minute budget
Mammoth asks people to play by the rules when it comes to bears